I was beginning to wonder how long it would take Katie to catch Chicken Pox.  I've lost count of how many times she's been exposed to the virus yet not caught it.  Imagine my surprise when she crept into bed on a Thursday morning about 10 days before Christmas complaining of a snuffy nose and a pain in her tummy.  I thought it was just a cold bug but upon investigation of her tummy, I discovered a very large spot, very much resembling an insect bite.  A quick inspection of the rest of her body brought several more spots to light.  Not many though.  Was this the long awaited Chicken-Pox?  I'm sure, as a mother, you're expected to know exactly what is wrong with your child all the time.  I had an inkling but went straight to Google to find out a diagnosis (who visits their GP these days?).  Trusty Google sites confirmed that Chicken-Pox spots look like insect bites and gave me lots of information and concerns to watch out for and reassured me that not all children are covered from head to toe in spots.  I had a chat with my childrens guru, Mrs VanderCave who reassured me that it sounded very much like Chicken-Pox and what the protocol was.  I was recently given some ViraSoothe by a friend whose children had the pox recently so with that, some Piriton; Calpol; Calprufen; and Tea Tree oil (to help prevent any infections) we were ready to rock and roll.


Thankfully Katie didn't have Chicken Pox particularly badly.  We had three days of new spots but she only totalled around 40 spots.  The Vira-Soothe is amazing stuff and stopped all the itching immediately.  I put a few drops of Tea-Tree Oil in her bath and a drop in her body wash and that prevented any infection within the spots.  What was most difficult was entertaining a relatively well and active child for a week without our usual activities to fall back on.  We wrapped up warm during school time and snuck off to the park and up to lakes near our house for long walks.  Being unable to take Katie shopping or anywhere public so close to Christmas was a complete nightmare.  One of my cats also needed her toe to be amputated during this period so I was rushing out of the house for vets checks as soon as Hubs arrived home from work.  The result was a pretty stressful build up to Christmas.

Hubs works within the NHS and was informed by a GP colleague that the biggest risk to children with mild Chicken-Pox is the frustration of their parents by the end of it.  He wasn't lying.  I couldn't wait for Katie to be well enough to go back to pre-school. I was anxious she would miss her Christmas concert but we managed to have all the spots scabbed over the day before the concert so back to pre-school she went. On a plus though, I am so happy that she wasn't really ill.  Lots of my friends have had children who have been extremely ill and I am so glad Katie was spared this.

As if having an illness wasn't enough to contend with, we now also have a new addition to our family.  This is Willow our baby Maine Coon.  She is Leo's half sister and, as you can see, they get along like a house on fire!! 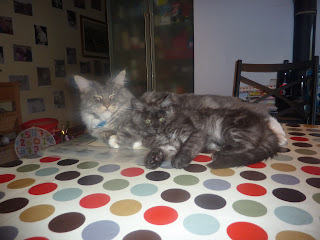