Ed: The sad tale of a little kitten... 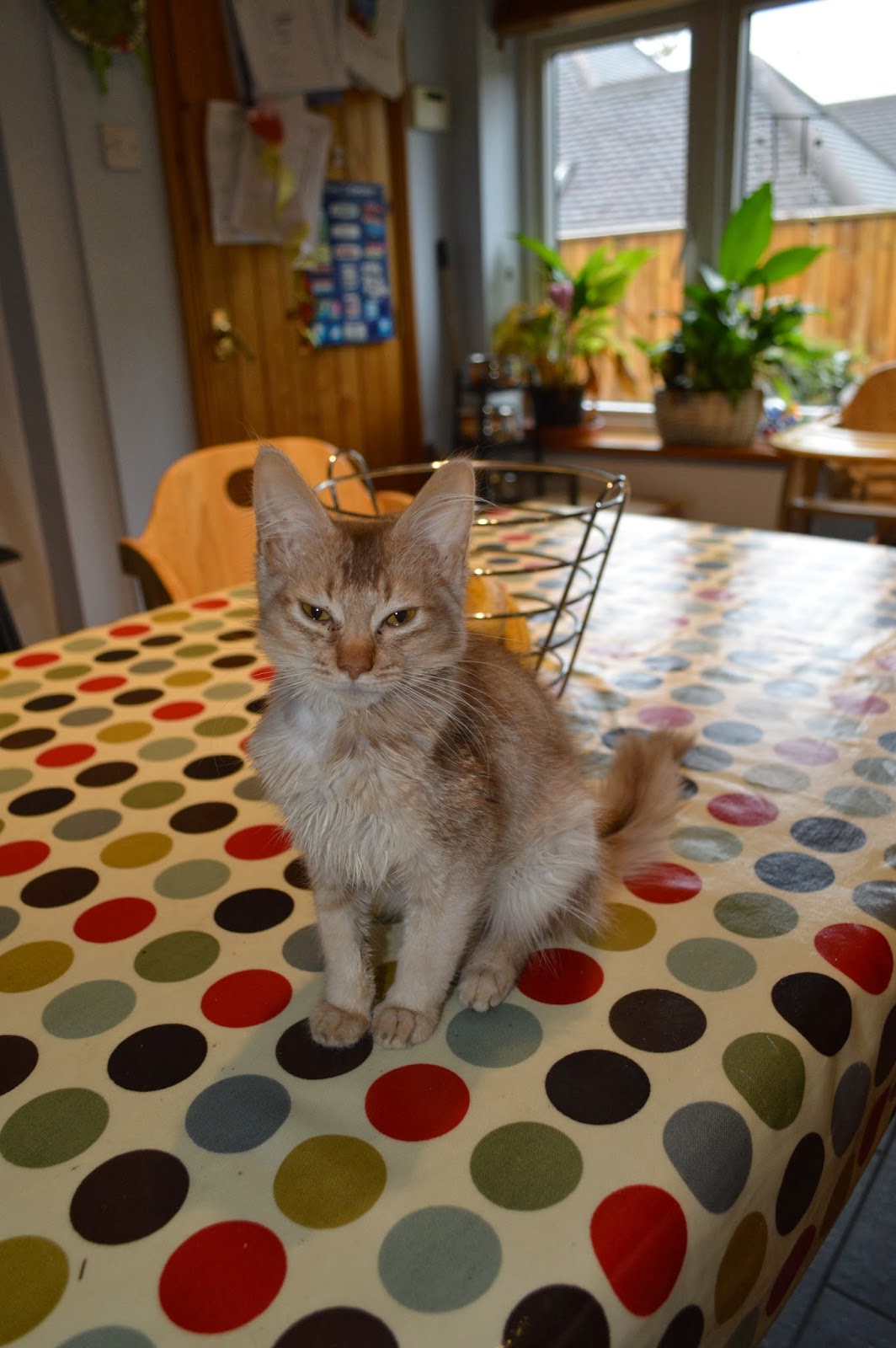 Last week the newest addition to the Katie household sadly passed away.  Ed, our gorgeous little Somali kitten.  Ed was less than 6 months old but we had known him since the day he was born. In fact, I chose him on the day that he was born and named him after Ed Sheeran, because of his colour.  I knew he was going to be mine.  He stood out because he was so cute.  He was the smallest and the one most in need of help finding a teat to suckle from.  The smallest he might have been but he was the first from the litter to do nearly everything.  He walked first; he opened his eyes first; his ears popped up first; he climbed out of the kitten box first.  He was a bundle of energy.  Full of life.  Exploring everything.  The kittens and their mother came to stay with us for about 10 days over the summer holidays whilst my neighbour went on holiday.  It was hard work having them to stay, and I would never romanticise having kittens ever again as a result but those kittens were adorable.  They would climb on me; eat my toes; snuggle up between my knees and play, play, play.  Ed was no different to his brothers and sister. He was just a bit more skinny.  He had lanky little legs and he was a bit smaller. 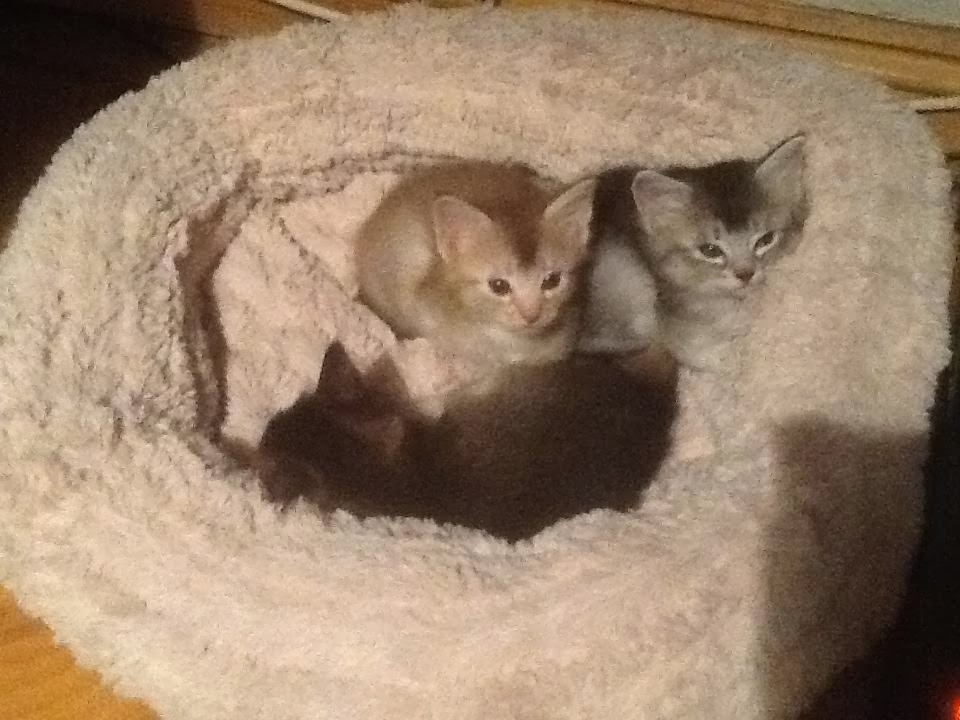 Ed moved in with us about 6 weeks ago.  Almost immediately we started to notice that he wasn't as boisterous as we would expect him to be.  He liked to snuggle up a lot.  He loved climbing onto our shoulders and sitting like a parrot.  He would go anywhere with us.  He slept very close to us at night, often under the covers.  He cried for cuddles all the time but he didn't want to play.  Initially we didn't worry.  He was going to be a small cat; his mother is tiny and Somali cats are incredibly affectionate and like to be close to their humans.  I carried him about in Pip's baby sling on occasion because he was following me about wanting to be cuddled.  He was also very hard to feed.  He didn't really want any of the food we were giving him and it became my mission to find some food that he would eat.  He lost weight and we started to get worried.  Eventually we discovered that he would eat freshly cooked chicken and fish on one of the children's plastic plates.  It was an enormous relief but I wasn't happy about him.  He stopped purring and he breathed so hard, like his whole body needed to help his lungs out so we took him to the vet.  Initially the vet diagnosed him with a heart murmur and asked to do an x-ray.  On the day we took him in for his x-ray it transpired the machine was broken so the vets did a scan and told us that there was something wrong with his heart, most likely a congenital heart defect, and we agreed to visit a specialist in the neighbouring county.  Our vets tabled the thought that we might need to consider putting Ed to sleep.  He was a very poorly little kitten. 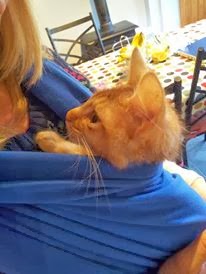 On the day we saw the specialist we had about an hour and a half of hope.  He did a scan (a very expensive scan - thank heavens for pet insurance!). There was no heart murmur but there was fluid on his heart and lungs that needed to be drained.  The vet told me that he wouldn't be considering euthanasia at this point.  He noted that the image around the heart was very white and that indicated that there was something in the fluid but he would let me know after the surgery.  I felt ecstatic.  I couldn't  believe it.  I had gone to the vet totally anticipating having to make a decision there and then but it seemed that there was now hope.

Then the phone rang.  It was the vet.  It wasn't good news.  The fluid around the heart and lungs was fibrous and full of protein.  He couldn't be 100% sure but he thought it was a condition called Feline Infectious Peritonitis or FIP.  It was a rare side effect of a common cat virus called the Coronavirus.  Due to his underdeveloped immune system the virus had mutated inside Ed and effected the walls of his internal organs and fluid was creeping in.  For the moment though, due to the surgery, Ed was full of life. He could breathe with ease.  We arranged for him to stay overnight in a heated incubator and for me to see a medicines specialist at 1pm the following day.  I then did a lot of reading up on FIP and knew that a decision was imminent. He had the wet condition which was always fatal.

I knew I was going to have to talk to Katie about what was going to happen.  I decided not to tell her about the virus but stick to the story that he had a heart murmur.  How can you explain the virus to a 6 year old?  She worries enough about her friends getting sick and being sick herself and I was concerned that she might worry more about why he died than the fact that he had died.  We had a very tearful chat at bedtime after she asked if Ed was going to die.  Actually she asked me if I was going to kill him!  I explained about euthanasia to her and about preventing his suffering.  I couldn't tell her when he was going to die though.  I didn't like leaving it so ambiguous but I didn't know myself.  She asked if she could see the body when he died and if she could help bury him.  I'd protected her from this when our other two cats died but I felt this time that she needed to be included as part of her healing process, so I agreed.  We held each other tight and cried hard together. 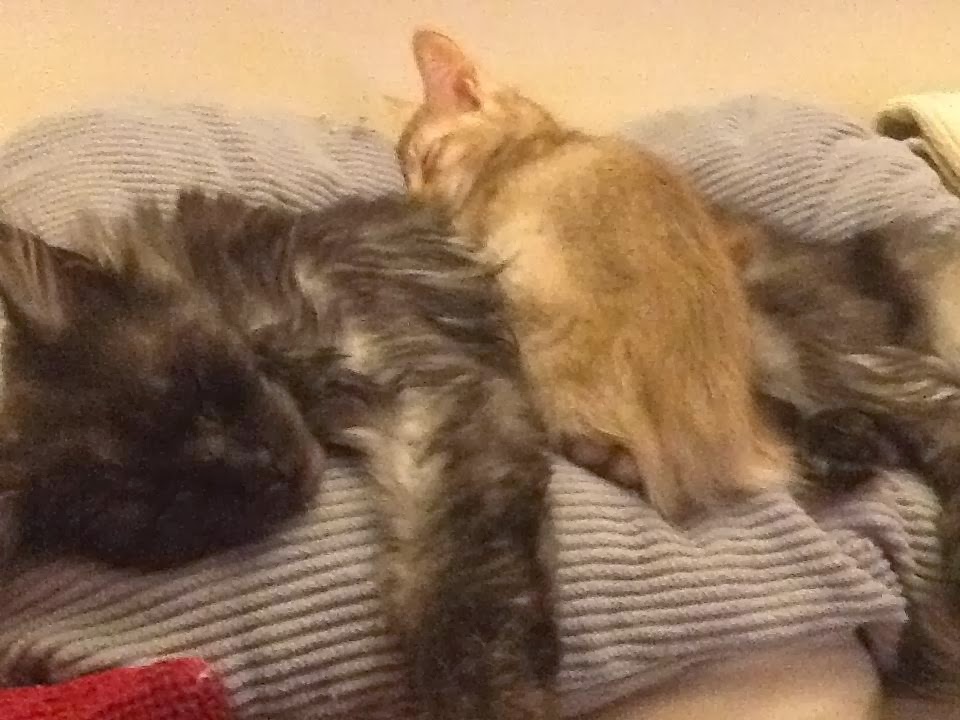 I phoned at 10am the next day and was told that Ed had had a good night and was full of beans.  I agonised for the rest of the day over what I was going to have to do when I arrived at the vets at 1pm.  I didn't want to bring him home to suffer but I couldn't euthanise a kitten who still had life in him.  I have a rule that the decision is made once the cat tells me, with their body language, when they've had enough.  It's hard to explain but you just know (and sadly I've had far too much practise over the past 20 years).

When I saw the medicines specialist she said that she had just seen Ed and he had deteriorated significantly and the illness had progressed.  I asked to see him.  He climbed into my arms and snuggled in. He then looked me deep in the eyes for the longest time and he purred.  I heard that beautiful purr for the first, and last time, in weeks but I knew what he was telling me.  It was time.  He was ready to go.  I nodded to the vet and said that the decision was made and could they put him to sleep.  We discussed the practicalities and we lay him on his special cushion and I gave him Reiki as he passed on.  I then had to hold it together to drive home.  Pip had been with me throughout all of this and I had to rush home to do the school run.

I brought Ed home and collected Katie from school. I waited until she asked where he was and I sat her down on my lap and explained it all to her.  She asked to see him so I put him on his cushion so she could give him a stroke.  She was very matter of fact about it all.  She told me she was glad Ed had died because it meant he wasn't suffering anymore.  She asked lots and lots of questions about what was going to happen.  We printed up some pictures and found a small shoe box.  Daddy came home and sorted out his grave and we had a little ceremony in the garden and said our goodbyes. Katie was quite funny really.  Our neighbour, the Cat Lady, came over.  Ed was the first born from her first ever breed of kittens.  Katie kept asking her if she was going to cry again.  She was fascinated by the whole process and how everyone was feeling.  Empathy is still a work in progress it would seem!

It is now a week later and I'm still feeling sad.  We are left with the added worry that our other cats have now come into contact with the Coronavirus and we need to see if they've been infected.  It doesn't help that Willow has had an allergic reaction to her collar and isn't very well. She has welts all over her neck and is on steroid cream.  I feel on tenterhooks.  I am watching them for signs of illness all the time.  We would have to be so unlucky for it to happen again though. Our vet said he hadn't seen a case of FIP in over 3 years and it's generally in cats under a year old so I'm trying to not worry about it.  They are a big part of our family though and very dear to us. The cats seem to be missing Ed though and have been pining.  I think we're all pining a bit.  Katie wants another kitten but we've said not yet. 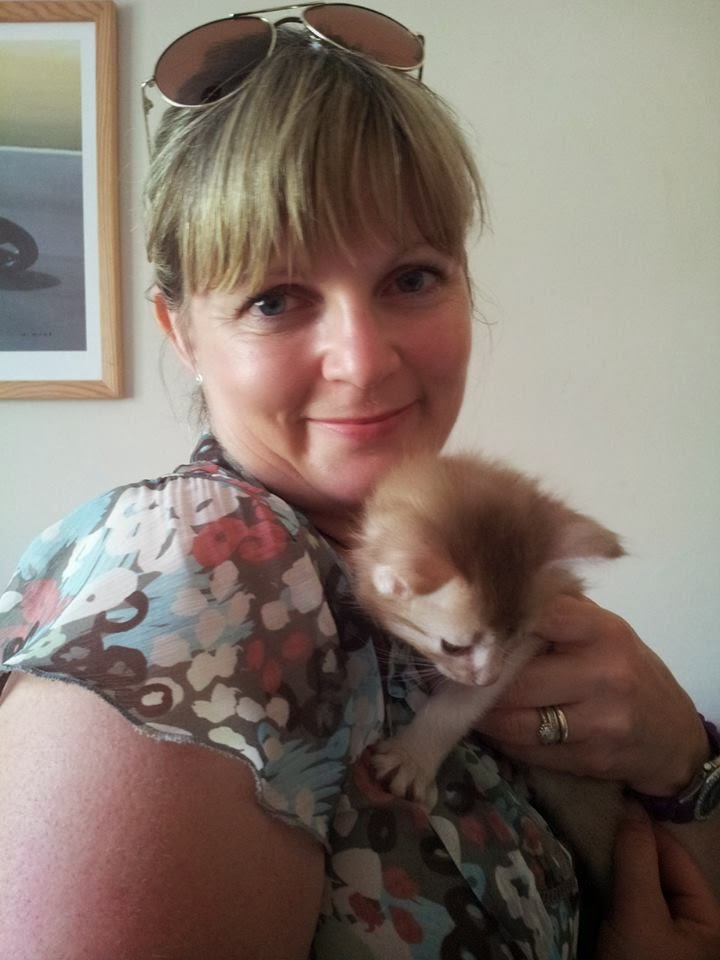 Katie and I have now had lots of chats about death and dying.  We have talked about what we think happens when you die.  I'm a Reiki healer and a bit psychic and have often experienced my other cats who have passed on.  I've told Katie to watch out for signs that he is around.  Feeling him brush against her legs when she's having a quiet moment.  This happens all the time in our house and there are no visible cats about.  I always say hello to who is visiting.  We think that we're more likely to feel a weight on our shoulder though when Ed is visiting. Katie is taking it all in her stride and doesn't seem to be overly upset.  She has moments when she says she is sad and we have a little cuddle but children are incredibly resilient it would seem.  More resilient than me that's for sure.

So goodbye little Ed.  You weren't around for very long but you reached into our hearts and left a gap in our lives and we will never forget you.