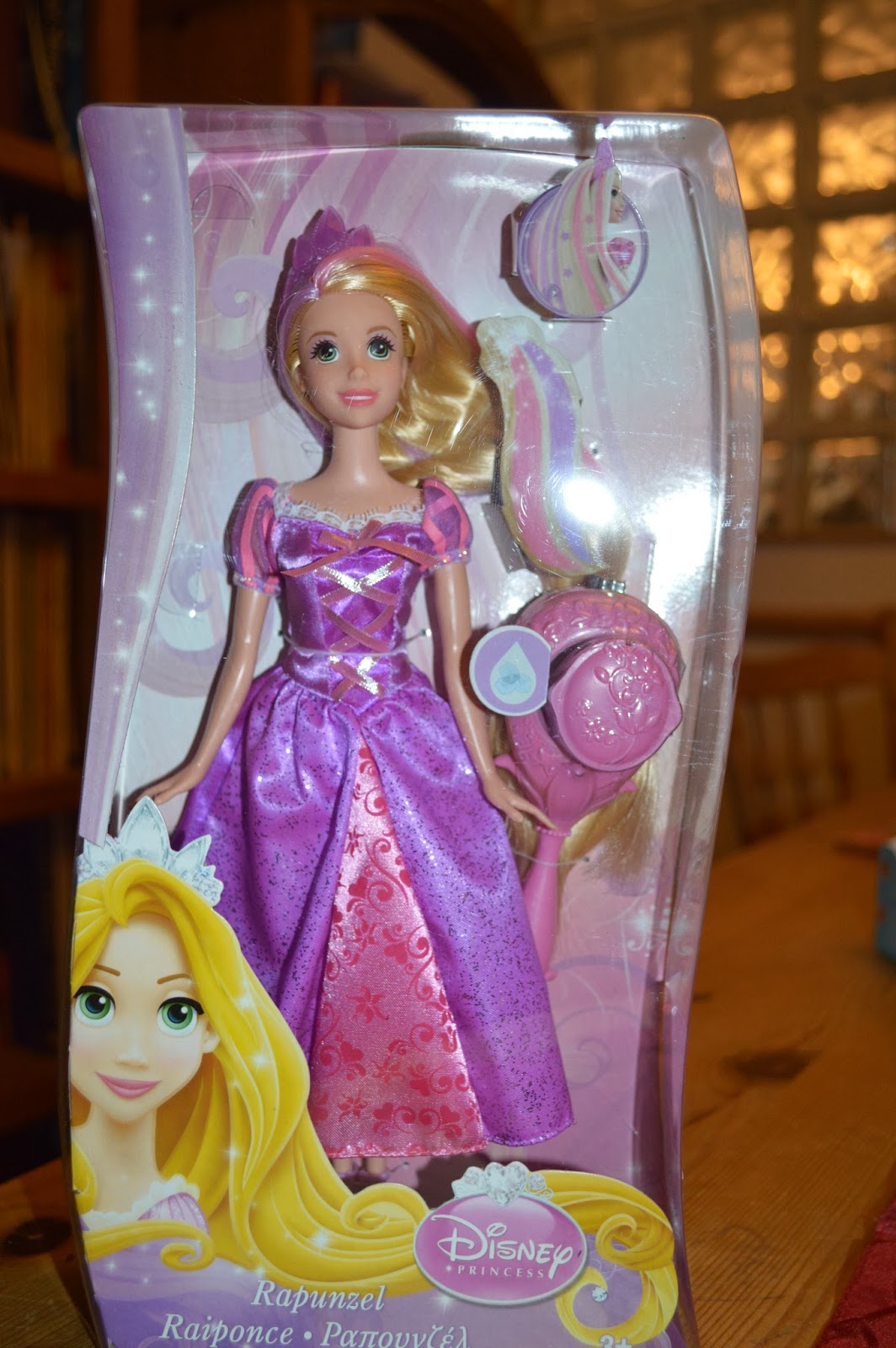 We love Disney in our house.  I love the movies, although I still say "films".  Ever since I wept at Bambi when I was 8 years old I have loved them.  I love the music and songs and can still sing all the words to the soundtrack from The Jungle Book. I love how the films represent the changing of cultural norms over time.  Hearing the stiff upper lip narration (not to mention the cigarettes) in The Aristocrats and 101 Dalmatians reflects a time long passed.  The modern films are able to showcase newer technology but Disney have always managed to maintain wonderful story telling.  Films such as The Lion King teach children about life and death and the importance of looking after our planet.  The Toy Story films are simply brilliant, mostly because one of the writers is one of my favourite writers and directors, Joss Whedon.


It won't come as a surprise to you to learn that currently Katie's favourite Disney character is Rapunzel.  We have various Rapunzel dolls.  A doll that sings "At last I've seen the light" (although she now has less hair after Katie radically cut part of it on Christmas Day two years ago! She probably can see the light far more easily these days!);  a head-sized Rapunzel that you can make up and do her hair;  and a general Rapunzel doll.  We have read the original Rapunzel story and the Disney version over and over.  Katie is desperate to have hair as long as Rapunzel, well she was until I showed her a video of the lady who actually has the longest hair in the world and we discovered how many health problems the weight of her hair gives her.  It places much illumination of the words in the song Rapunzel signs in Tangled "I brush and brush and brush and brush my hair, wondering when will my life begin?"


Katie was very excited that Disney have brought out a Rapunzel doll, as part of their Dream Toys collection, whose hair you can brush and it changes colour and was beside herself with excitement when this very doll arrived from Argos.  She's called Disney Princess Colour Magic Change Brush Rapunzel. 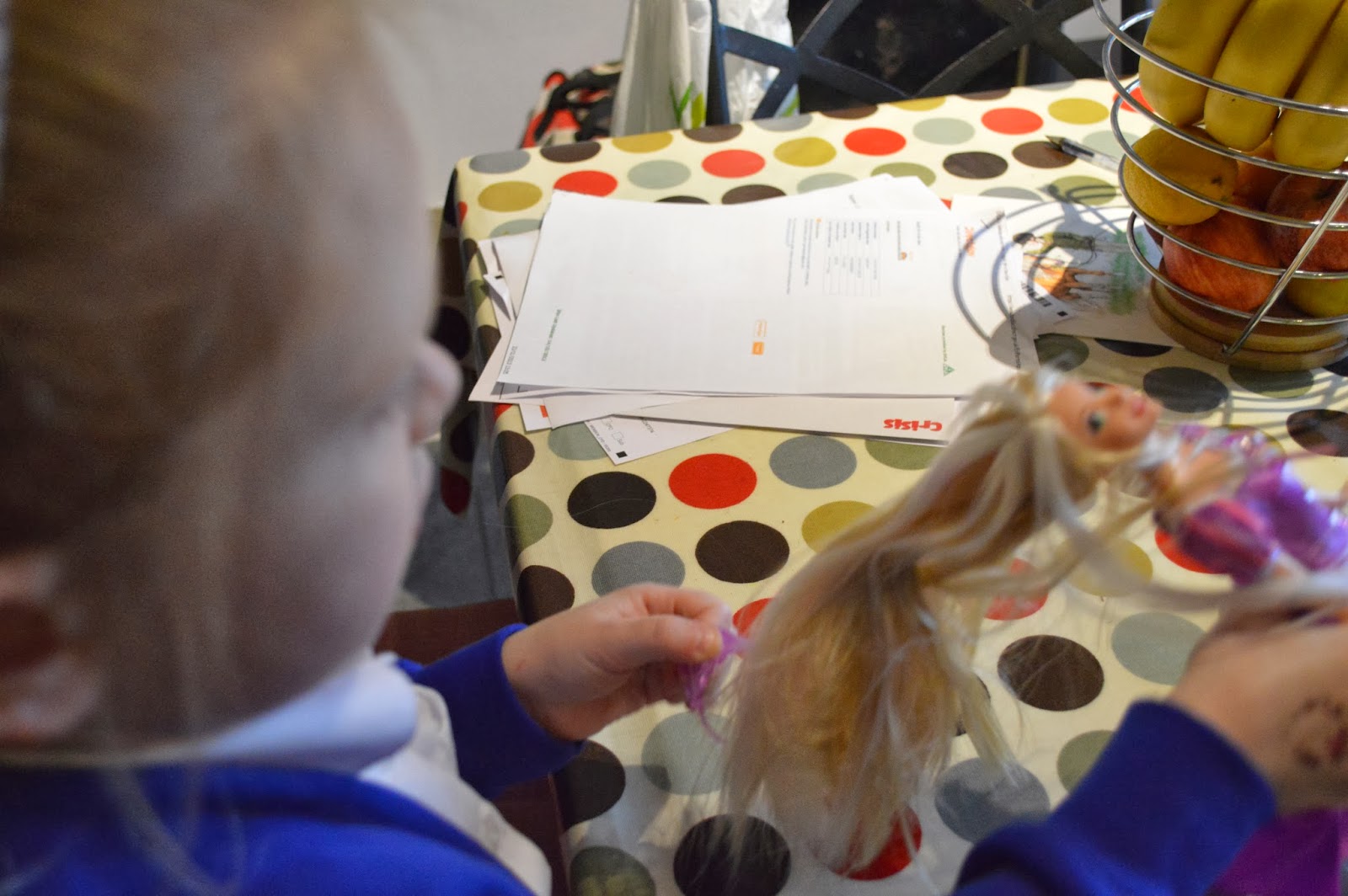 Mummy was ordered to get the doll out of the box as quickly as possible!  Actually this order was easier than I was expecting.  Usually the packaging is so sealed that you need military grade tools to access the toy but the external packaging was removed without even the need for scissors, which was a nice change.  Scissors were required to access the doll inside however, although I probably could have retrieved her without scissors if I had a spare half an hour and wanted to lose my nails.  With any toy the mission is to get the toy up and running as quickly as is humanly possible, preferably before your child internally combusts with excitement and frustration.  We almost managed this although we didn't read the instructions fully enough so delays were experienced. 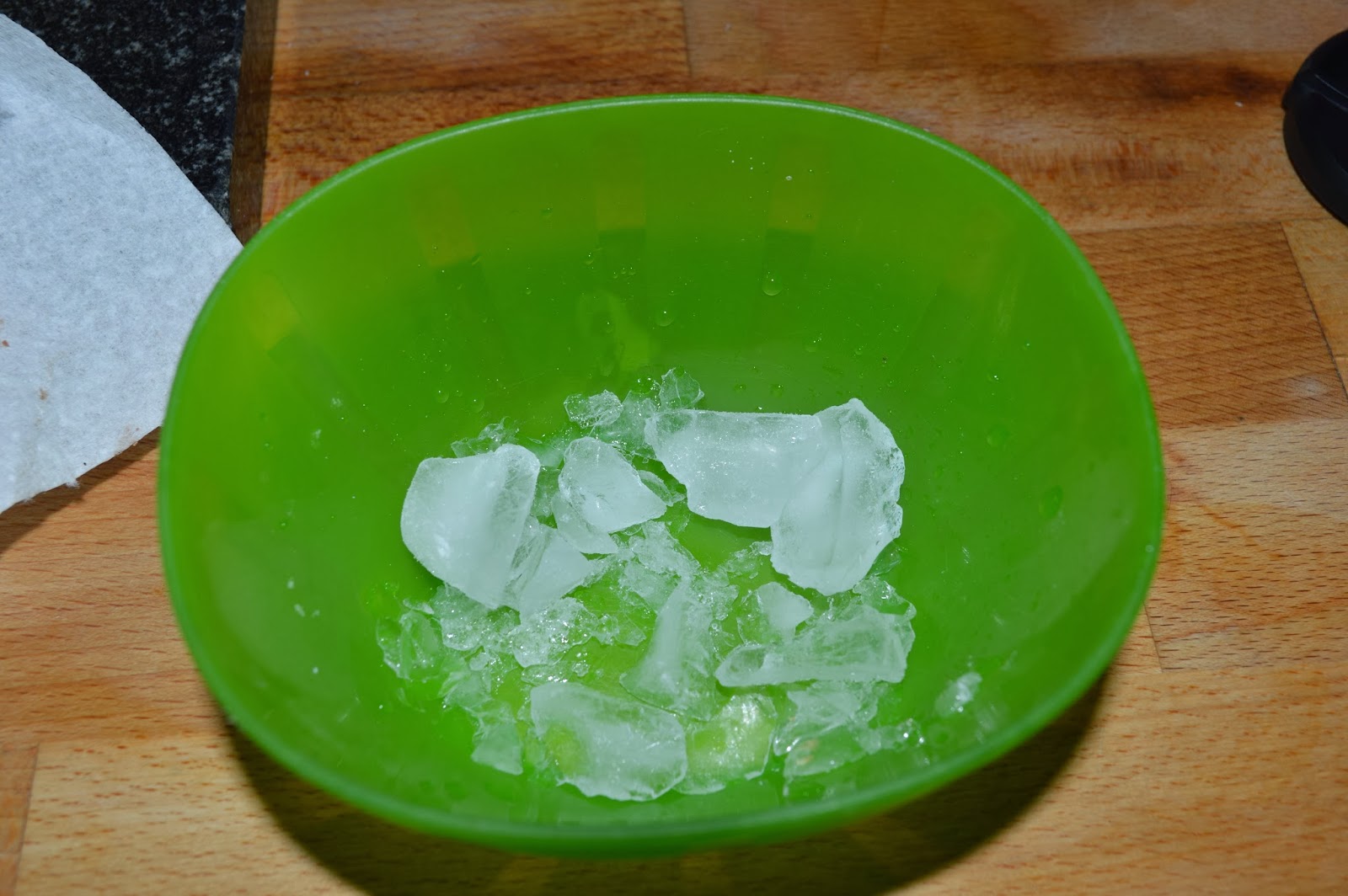 This particular Rapunzel has a magic brush that changes parts of her hair from blonde to pink when you run the brush over it.  On first reading it appeared that you filled the brush with cold water.  We circumnavigated how to open the brush and fill it with water and rushed to brush Rapunzel's hair but nothing happened.  Not a trace of pink in sight.  I re-read the instructions and read (in the small print of course) that crushed ice works best in the brush.  We quickly refilled the brush with crushed ice (because we are lucky enough to have a fridge/freezer that makes it all quickly for us) and, Hey Presto, pink stripes appeared.  Katie was delighted and spent half an hour brushing her hair.  She then realised (without my knowledge I might add) that you can make her hair turn really pink if you run the hair under the cold tap.  I don't think this is what Disney had in mind for the toy though but kids will be kids and they do like to explore all the permutations that a toy has to offer.  Rapunzel has now had to dry off on the radiator on many occasions.  She seems to be holding up to it all though. 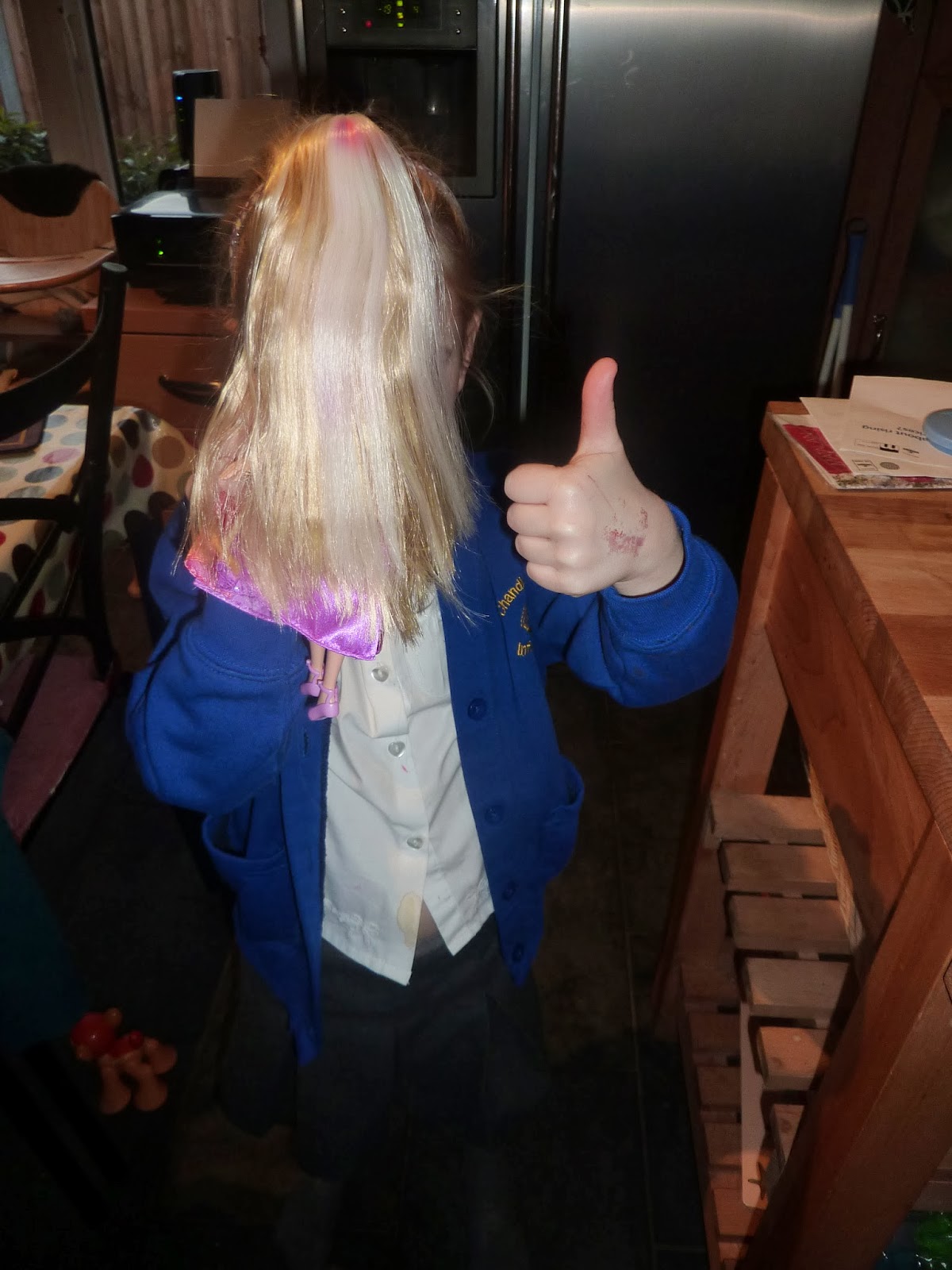 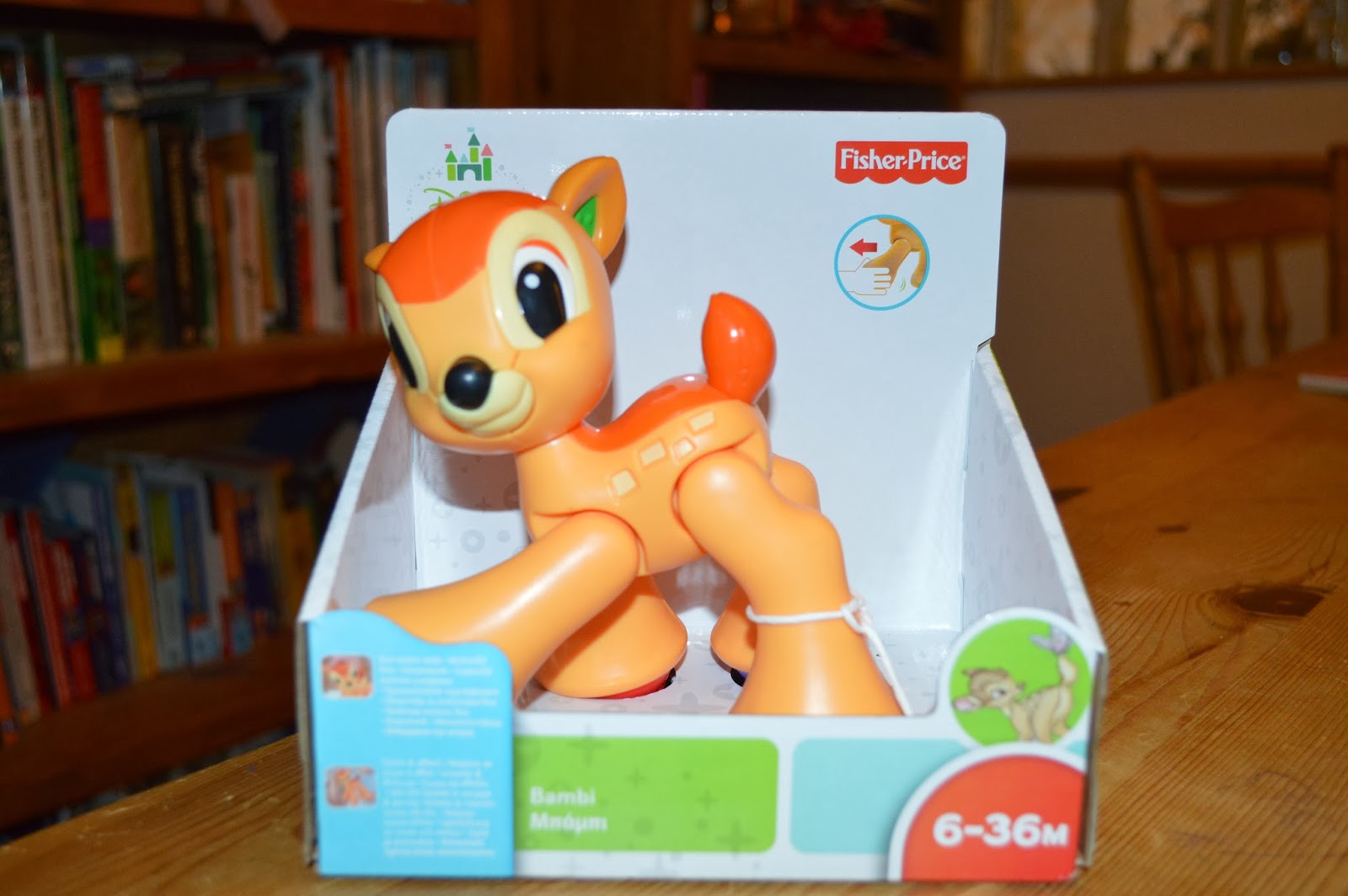 Pip is far less discerning in his choice of toys at the moment.  Being 13 months old means trying to get into as many cupboards as possible and pulling everything out of the drawers rather than playing with the lovely toys that fill the playroom.  Pip was happy to receive from Argos a Fisher Price/Disney Baby Play Pals Bambi toy that accompanies his Disney musical train set. Obviously I had a hand in choosing the Bambi due to my love of the little fella.  This toy is aimed at young children aged 6 - 36 months.


I will say that Bambi was much harder to get out of the box than Rapunzel.  I'm not sure if the manufacturers have seen how easily my little monkey can get into things and were taking precautions but scissor support was required to access him. 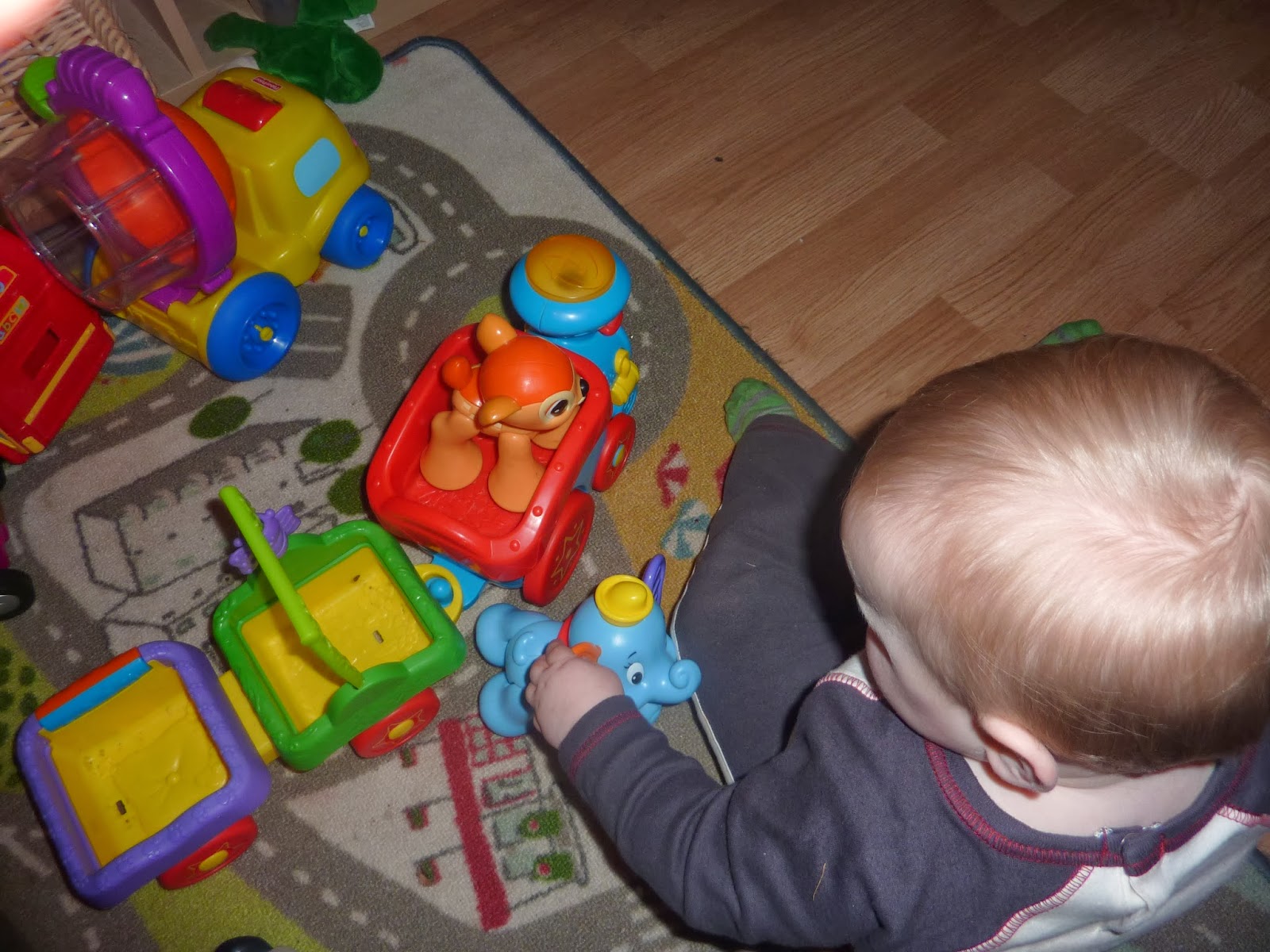 For children wanting a toy that's all singing and all dancing then this isn't the toy for them. I like these toys because they can grow with a young child.  A baby can enjoy holding the toy; feeling the texture and moving the legs about.  An older child can play with the train set and interact with the toys, supporting the development of creative play.  Pip is a bit in between these stages at the moment.  He did have a little play with Bambi and particularly enjoyed his current favourite game of flinging the toy as far as he could.  I think he might be a bowler when he grows up.  He can certainly fling his toys a considerable distance.  I will say that the toy has held up to lots of flinging about so is very durable.  I've also noticed Katie (and some of her friends) playing with Bambi and his friends as well and they are now mostly aged 6, suggesting that Bambi and his friends might be hanging about in our playroom for some years to come. 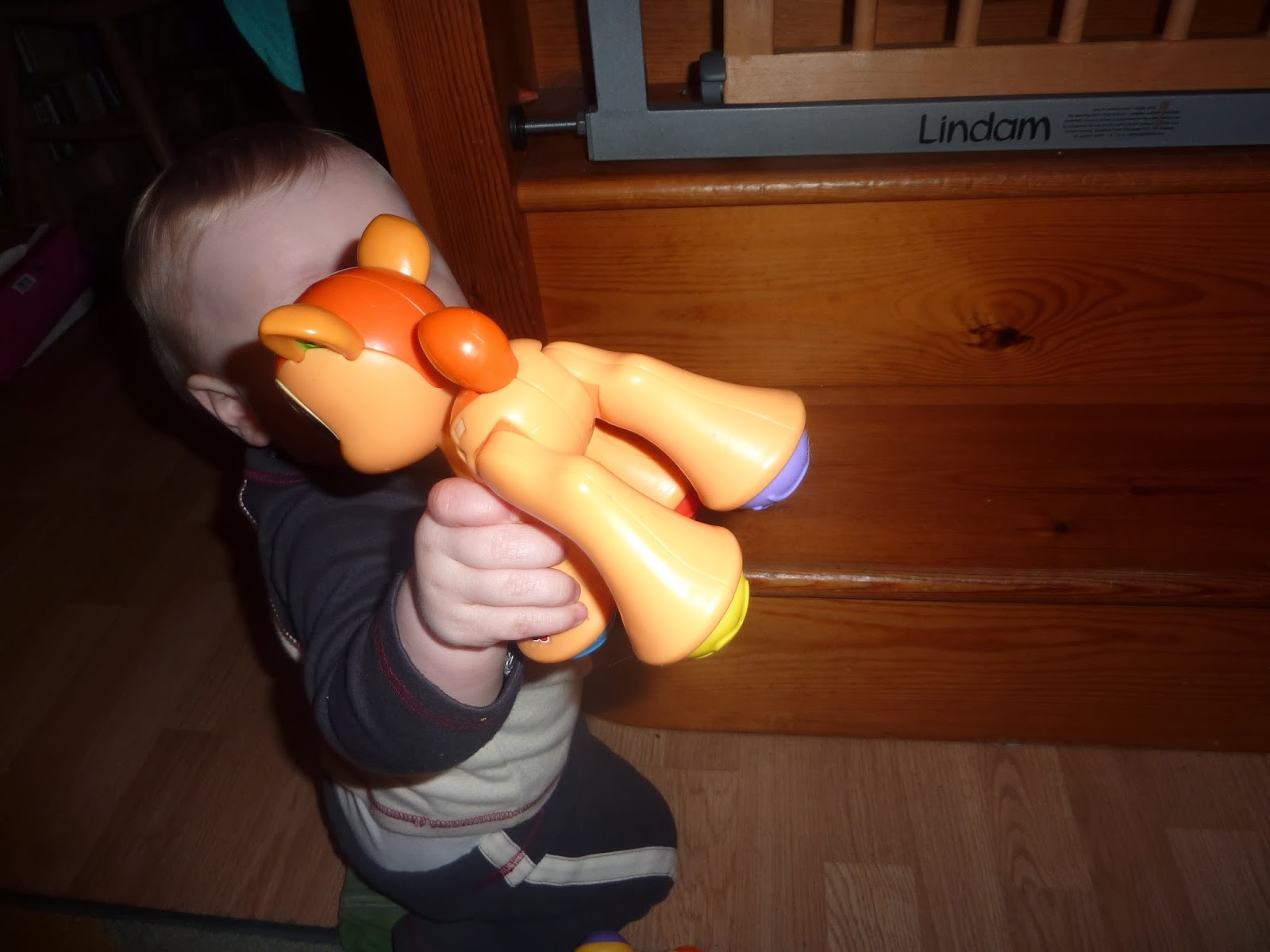 If you want to find out more about the toys above then click here for the full list of the Christmas Dream Toys available at Argos.


All the views contained in this review are mine, Katie and Pip's (as much as he is able to give a considered opinion at 13 months old).
Email Post