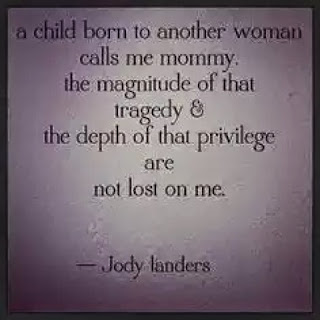 Over the past few weeks there has been a change in how Katie is talking about her Birth Mum.  Actually she's been quiet on the BM front for a little while now, where she used to talk about BM and ask lots of questions over the past few years.

We were chatting about her freckles whilst getting dressed a few days ago and were admiring Katie's beautiful freckles over her nose and cheeks.  I said "Do you know where your freckles come from?  She replied "From being kissed by the fairies"  This is my usual comment about freckles.  I agreed with her but then added "Well I think they also came from your Birth Mum because she has lots of freckles as well." Katie was interested for a moment or two and then changed the subject.

Later that day, on the swing, Katie said to me "Did you know that ******* (name of BM) is dead?"  I replied by saying "Is that what you'd like to think is true?".  She replied vehemently "No she is Mummy" so I just said "Ok honey" and we left it at that. I didn't want to push her whilst she was clearly making a statement about her feelings.  She is now 6 and entering the age where she may want her life to be more straightforward, with no loose ends.  Her BM is an almost Disney-like figment of her imagination so I can understand her need to make life have more clarity.

Today whilst coming home in the car with some friends Katie said to my friend's teenage son "Do you know whose tummy I grew in?".  She then started saying the initial "G G G G".  My friend's son looked a little confused, unsure what to actually say because he knows Katie is adopted and also knows the name of her BM.  I should just add at this point that this family are Katie and Pip's legal guardians so know their full story.  Katie then said that she grew in my tummy.  I replied "Would you have liked to have grown in my tummy?".  "I grew in your tummy" was the reply.  I'm thinking rapidly at this point as to what to say.  I don't ever want to lie to her.  "You definitely grew in my heart" I said to which she replied "I grew in your tummy" to which both me and my friend paid replied "Yes you grew in my tummy".  She then said "I did" in a tone that suggested she was actually saying "Don't you go paying lip service to me you two!".  She then went back to chatting to my friend's son as if nothing had happened.  There was clearly a very big statement going on from her though.

A third issue that has arisen is relating to contact with her middle sibling.  There is the issue that Kip might be attending the same school as Katie from September.  I asked Katie if she was happy about this and she has been quite non-committal about it.  I then asked her if she wanted people to know he was her brother.  She said "No" to this.  When I asked her why she said "Because I'll have to play with him!".

It seems very important to her at the moment to clarify her relationships in her life.  This is coming off the back of several weeks of very difficult behaviour yet she has been brilliantly behaved over the past few days. She has gone from rejecting to loving and cuddly.  I'm not going to complain about the beautiful behaviour but I am questioning what is going on in her mind at the moment. I think she wants to cement her place in our lives without any intrusion from complication and checking to see if we're going to reject her.  She definitely tests this issue far more with TCM who leaves her on a daily basis to go to work.  She was very perturbed that TCM wasn't coming with us on our lovely day out to Paultons Park today.  I understand that and I share that feeling wholeheartedly.  This does make me ponder about the training we receive about using the Life Story Book to talk about the children's history and I do wonder if it can feel like rubbing salt into a wound of being different.  I know how much I hated having two Dads when I was growing up because I had a Birth Father and a Step Father. I just wanted the one.  It was emotionally far too confusing.

I am going without knowing on this occasion and will just be led by what she says and does and see where we end up.  There is an inner anxiety within me about getting it right but I'm not sure there is a right.  I think Katie needs reassurance that she is loved.
Email Post
Labels: adoption