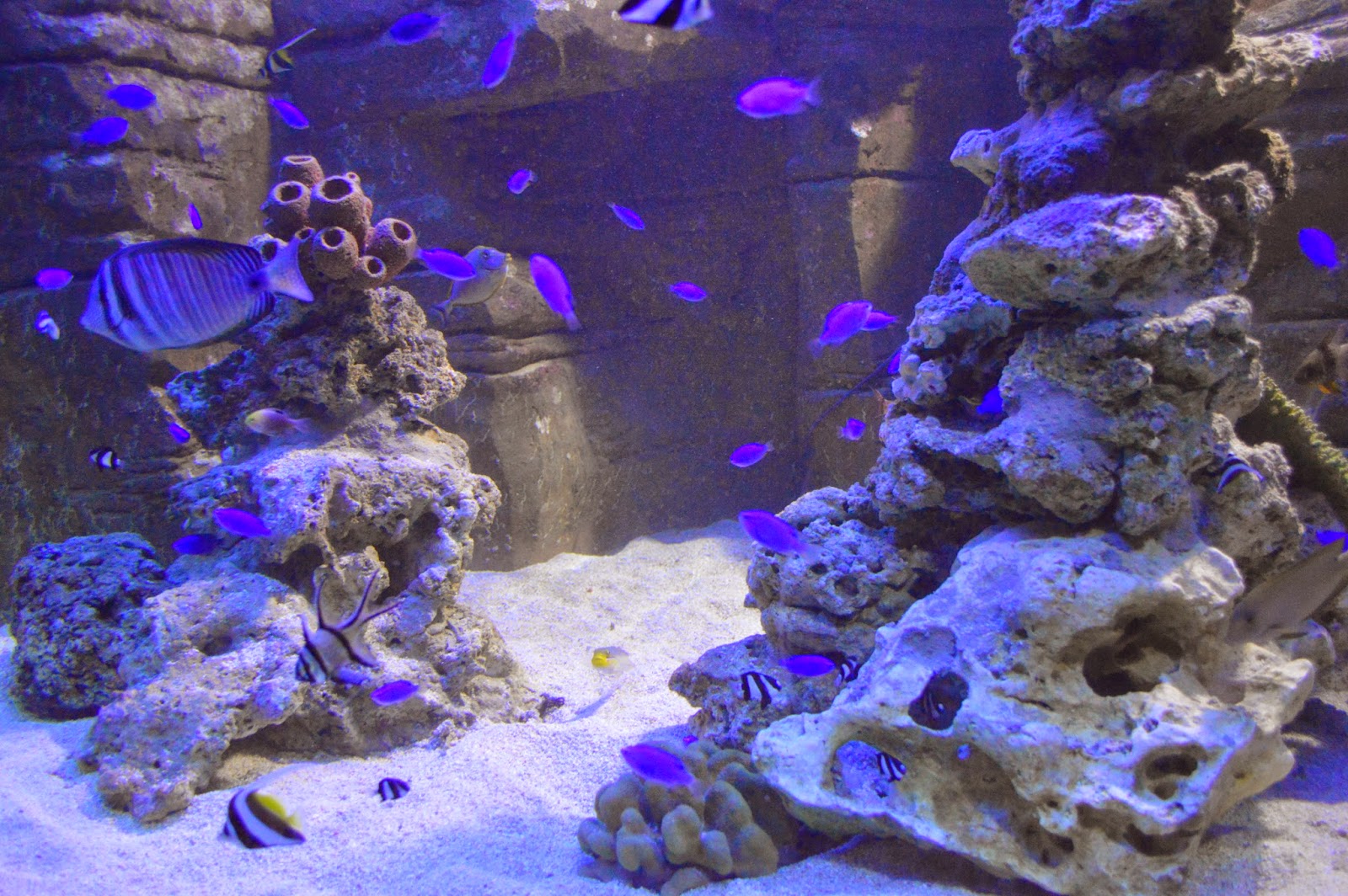 The day finally arrived when we went to court to formally celebrate Pip's Adoption.  I was very excited because, although we had already received Pip's new birth certificate in the post, it marked the end of a very long journey to get to that point.

I had it all planned.  We wanted to mirror Katie's adoption day so that she could revisit her own celebration 4 years later.  The day would involved a morning at the Blue Reef Aquarium followed by lunch at Giraffe and then off to court to meet the judge.  I knew Pip would love the aquarium because he is very fish crazy at the moment.

Things didn't go quite according to plan though.  I should know better than to plan by now, shouldn't I?

One reason why started late afternoon the day before our court day.  I popped to the petrol station after
collecting my nephew to top up the petrol. I didn't really need any petrol but the Girl Guide in me always liked to be prepared for any eventuality i.e. Martians landing and I have to drive to Scotland without stopping for petrol. Also it's what we Brits do for any special occasion that involves the car. We wash the car and fill her up with petrol.  It's almost cultural!

At the petrol station my lovely daughter decided to repeatedly open and close her car door, despite being told to sit quietly with Pip and my nephew.  I was hot and distracted and had to repeatedly ask her to close her door. I filled the car up with petrol and jumped back in the car to drive to the pay booth.  As I put the key in the ignition a horrible feeling washed over me.  I had just put unleaded petrol in my diesel car.  A four letter word washed around my mouth.  The words I uttered were "Oh No!".

Thankfully I realised before turning on the engine. 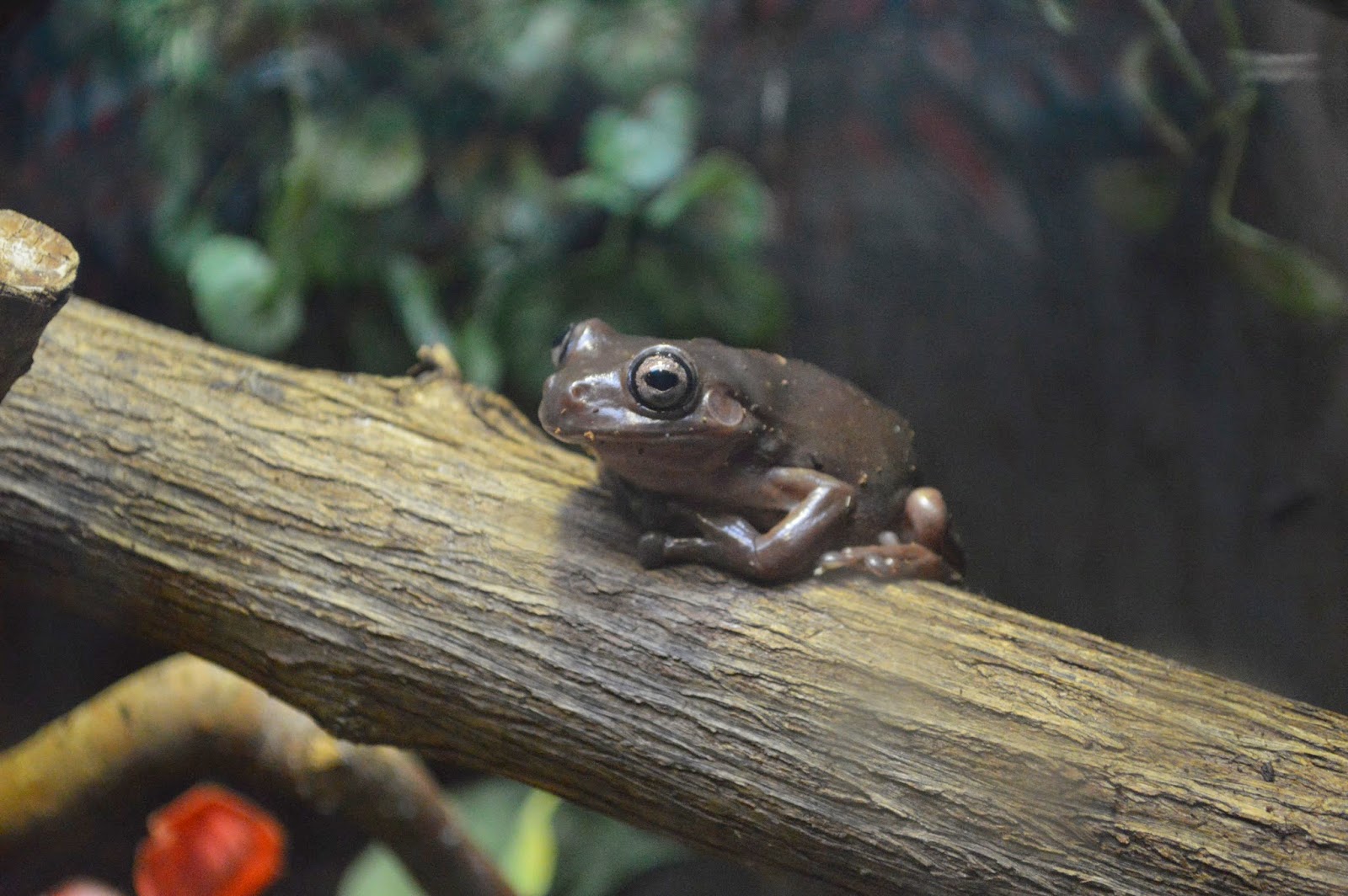 So there I was on the petrol station forecourt, at tea time, in the baking heat, with three children in the back of the car. First port of call was to phone the AA and let the petrol station know. The forecourt attendent kindly told me off for using my phone on the forecourt and told me I had to move quite some distance away.  I told him I had three children in the car, including a baby and couldn't leave them.  He was very unhelpful, to put it mildly. He received a piece of my mind when I left.  With the AA sorted I phoned TCM and asked him to collect the children whilst I waited with the car.  You can imagine how delighted he was at what I had done.  I now know that 800 people do the very same thing every day. It was an expensive mistake though but not one I have ever made previously in nearly 30 years of driving.

Long story short I was on the forecourt for 2 hours whilst waiting to be picked up and the car returned home.  Fuel Assist were booked for 7.30am the following morning to drain the car for me.

So with everything going on we had to reorganise our timetable for the Adoption Day.  We decided to
do the aquarium in the afternoon after the court visit and let the children burn off some steam after having to contain their energy whilst in court. 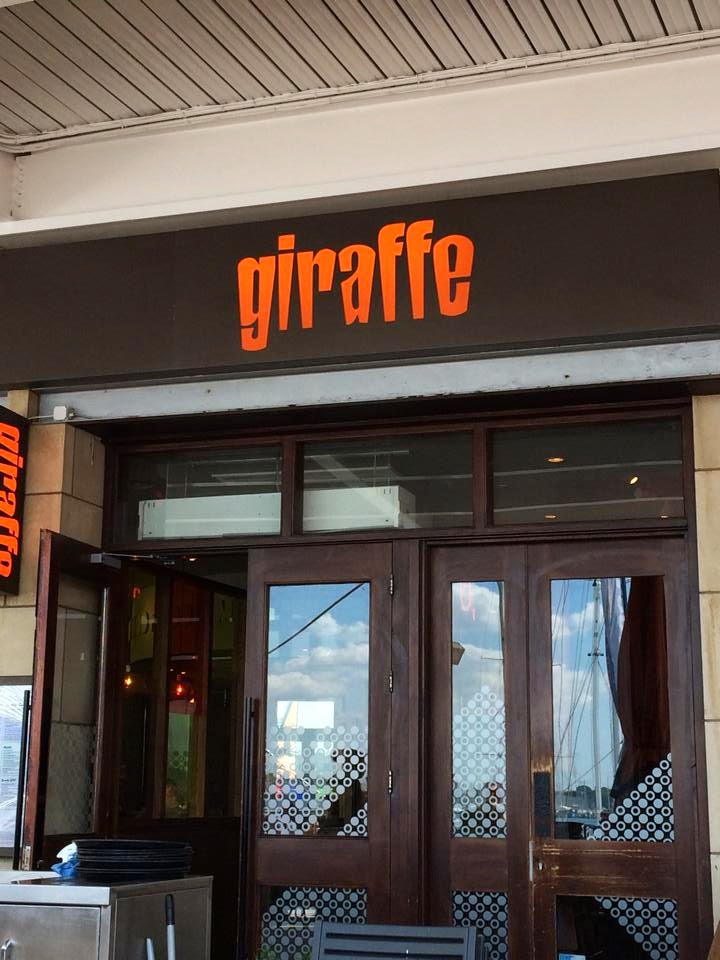 Court day arrived with beautiful sunshine.  It was really the most wonderful weather.  The reorganised schedule meant I was able to put Pip down for a nap before we left.  My sister was able to come with us at the last minute which was lovely that she could be a part of the day but  felt ironic because if she had decided to come the day before I wouldn't have been at the petrol station with all the kids in the car at the time I was because my nephew wouldn't have needed to stay overnight with us!

With everything going on the day and the children arguing it felt quite rushed and I was feeling quite stressed about getting to the places we needed in good time.  We didn't have as long as we wanted for lunch, although the lunch was lovely.  I can thoroughly recommend eating at Giraffe.  The food is delicious and the staff we so helpful.  The children had loads of plastic giraffes to take home and a balloon each. I had a lovely jambalaya which was gluten-free so I was delighted with that. Pip loved his pasta and enjoyed sharing my lime and soda (his face at the sour taste was a picture!).

We made it to the court with 5 minutes to spare (I swear I will write into my will that I have to be late for my own funeral!).  Our Social Worker and his Foster Carer were waiting for us outside.  It was lovely to share the occasion with them both.  The judge was the same judge who oversaw Katie's adoption case as well so it was lovely to catch up with her and for her to see how well Katie was doing.  Pip wasn't interested in being in the court in the slightest.  He was hot and bothered and very grumpy.  It was lovely to see Katie helping him stamp his certificate though and remembering how she stamped her own certificate nearly 4 years ago.  It was difficult to immerse myself in all the memories and emotions though with Pip charging around everywhere and the intense heat! 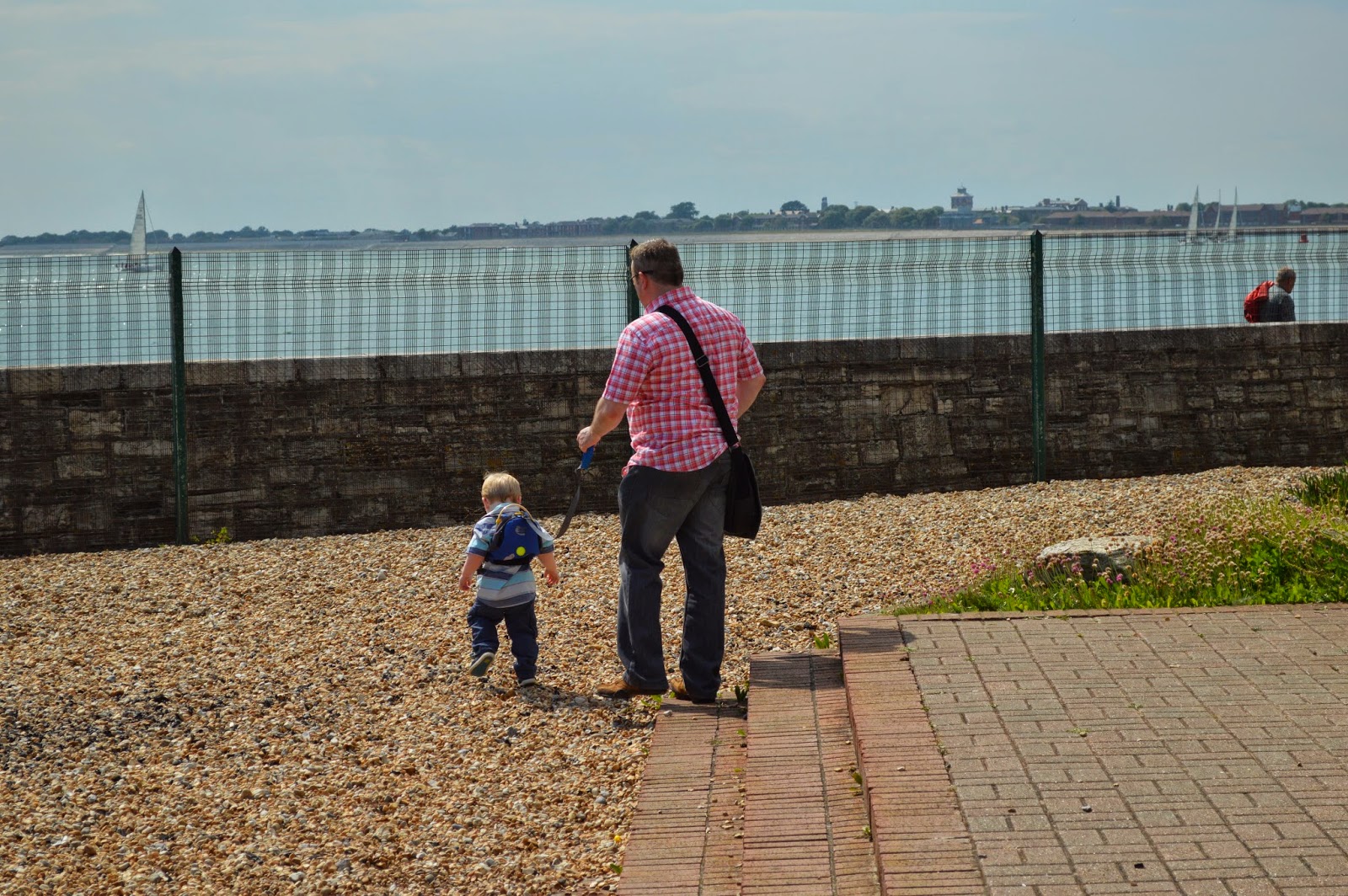 We attempted to get some nice photos of us in the courtroom but, by this point, Pip was having none of it and it was very hot in there so we rushed it all through.  The older children had a play about in the dock and looked around and then it was time to leave.  It really is a very odd event I must say.  It's a day that feels like it should be filled with lots of emotion but the reality is it's a quick affair and there's little opportunity to reflect. I felt like I was floating above it all rather than being a part of it.  Still, it was lovely to be there and know that Pip is legally ours and to mark the occasion.

We said goodbye to the judge and she asked us if she would be seeing us again in the future.  My response was "No way!" I know my parenting limit and two children is definitely it!

We had a few more pictures with our Social Worker and Pip's Foster Carer outside the courts and then we went off to the aquarium. 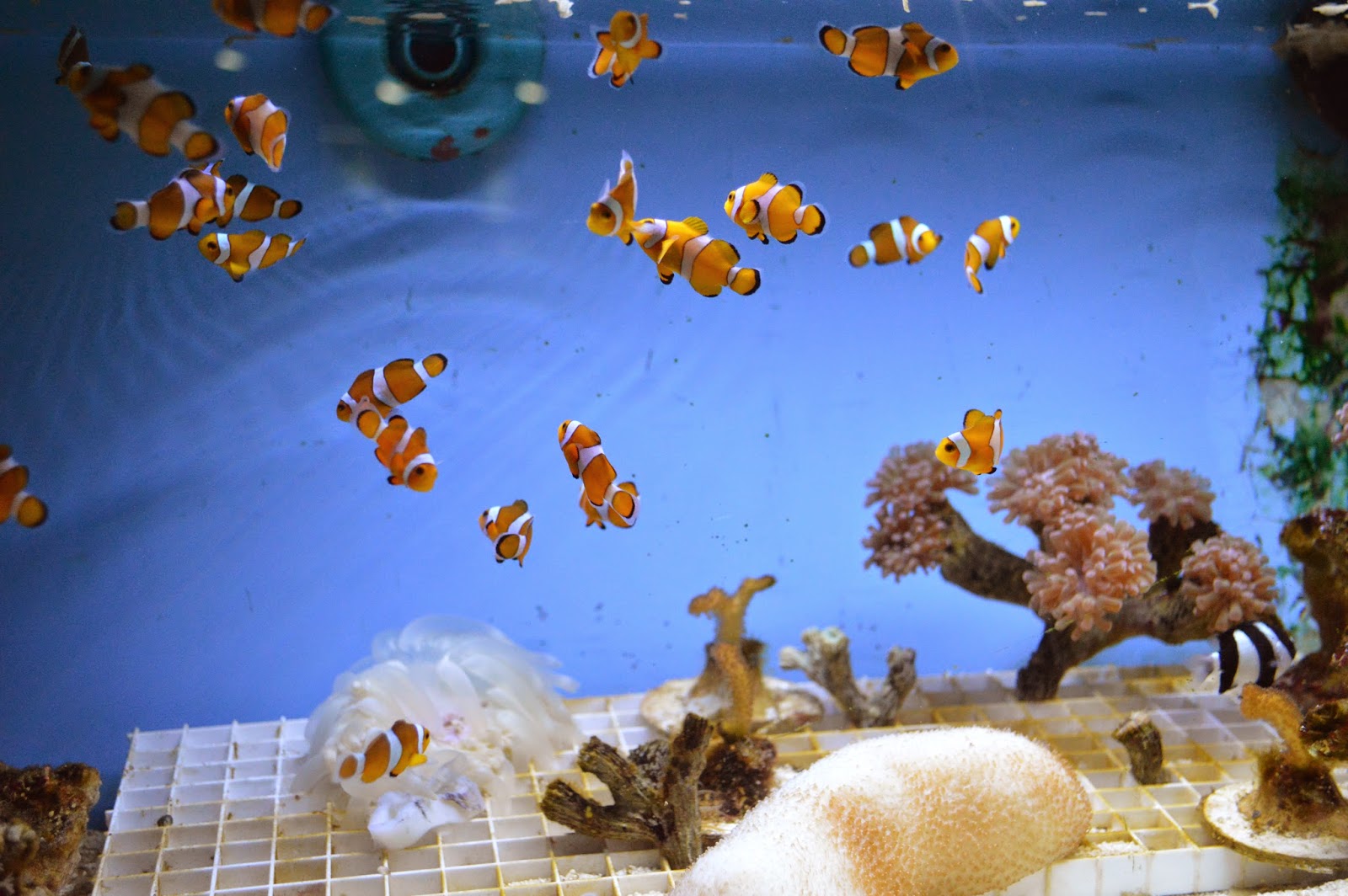 As I predicted, Pip loved the aquarium.  TCM was holding him on his reins and all I saw of him was the pair of them whizzing past at high speed, back and forth, excitedly looking at all the fish, especially his beloved Nemo fish. My sister and I attempted to keep up with the older two children. Thankfully we know the aquarium well and it was quiet there so we knew that they could have a certain amount of freedom although we did lose them once which caused a panic!  I had given them two disposable cameras each to take their own photographs of the day so I await with interest to see what they have photographed.

An ice-cream outside the tearooms ended the day and we put a very tired Pip into the car to drive back home. 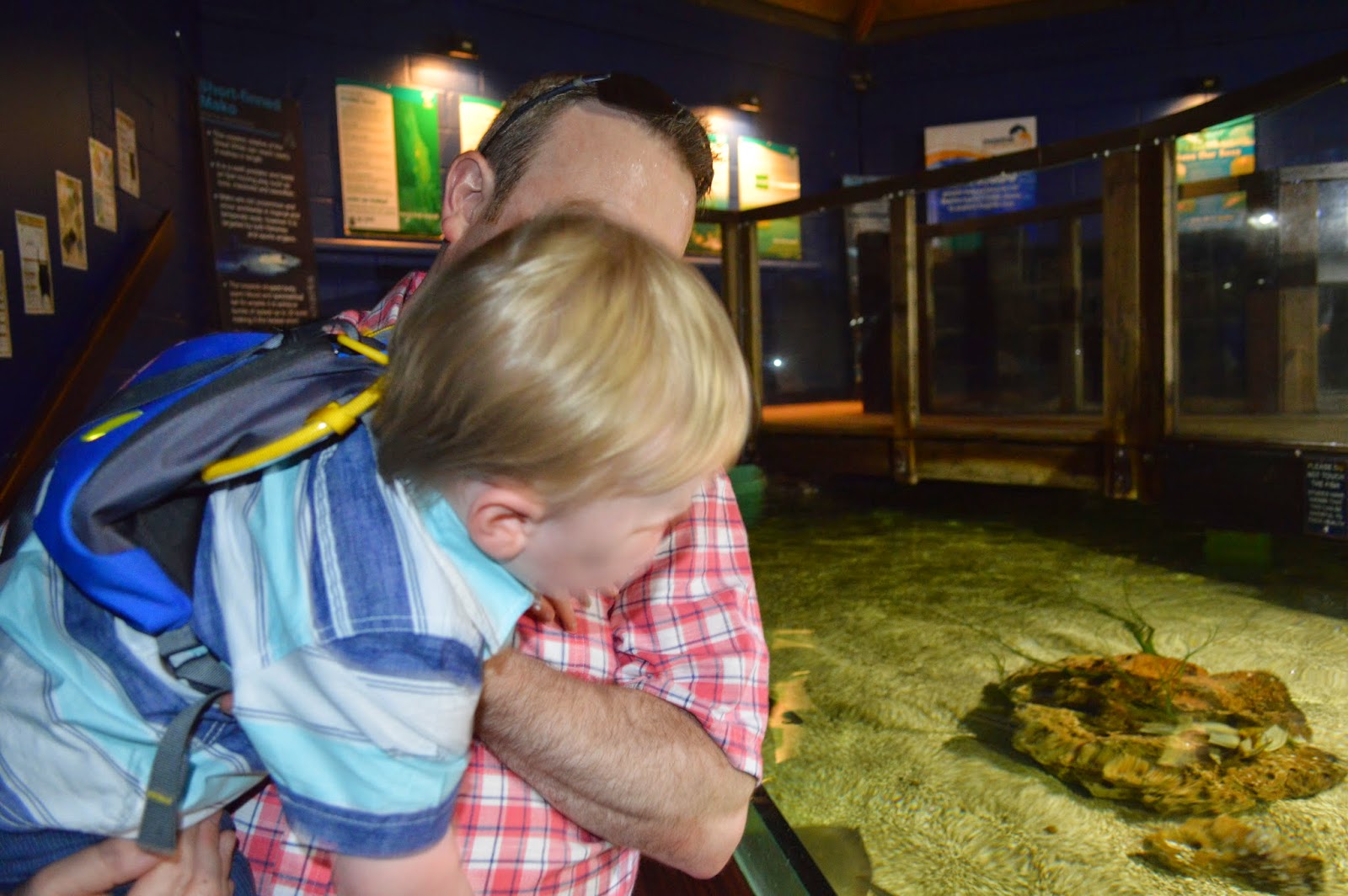 It's funny, I reflected later on that I almost had the same expectation of the day as I might do of a day like Christmas.  There was the hope that it would be a day to remember; a wonderful day full of sunshine and happiness and emotion.  We did have the sunshine and there was plenty of emotion.  The emotion was mostly as a result of the older children bickering or moaning or demanding a toy or sweets or ice-cream etc etc.  If I was honest, the day was a reflection of our family life.  Just like Christmas the relationships between people do not suddenly change because there is a special occasion. Children don't really understand that a special occasion means that they could try being on their best behaviour.  It can feel like that they morph into crazy children who seem hell bent on doing everything they can to sabbotage the day.  The reality is that they are just being kids. 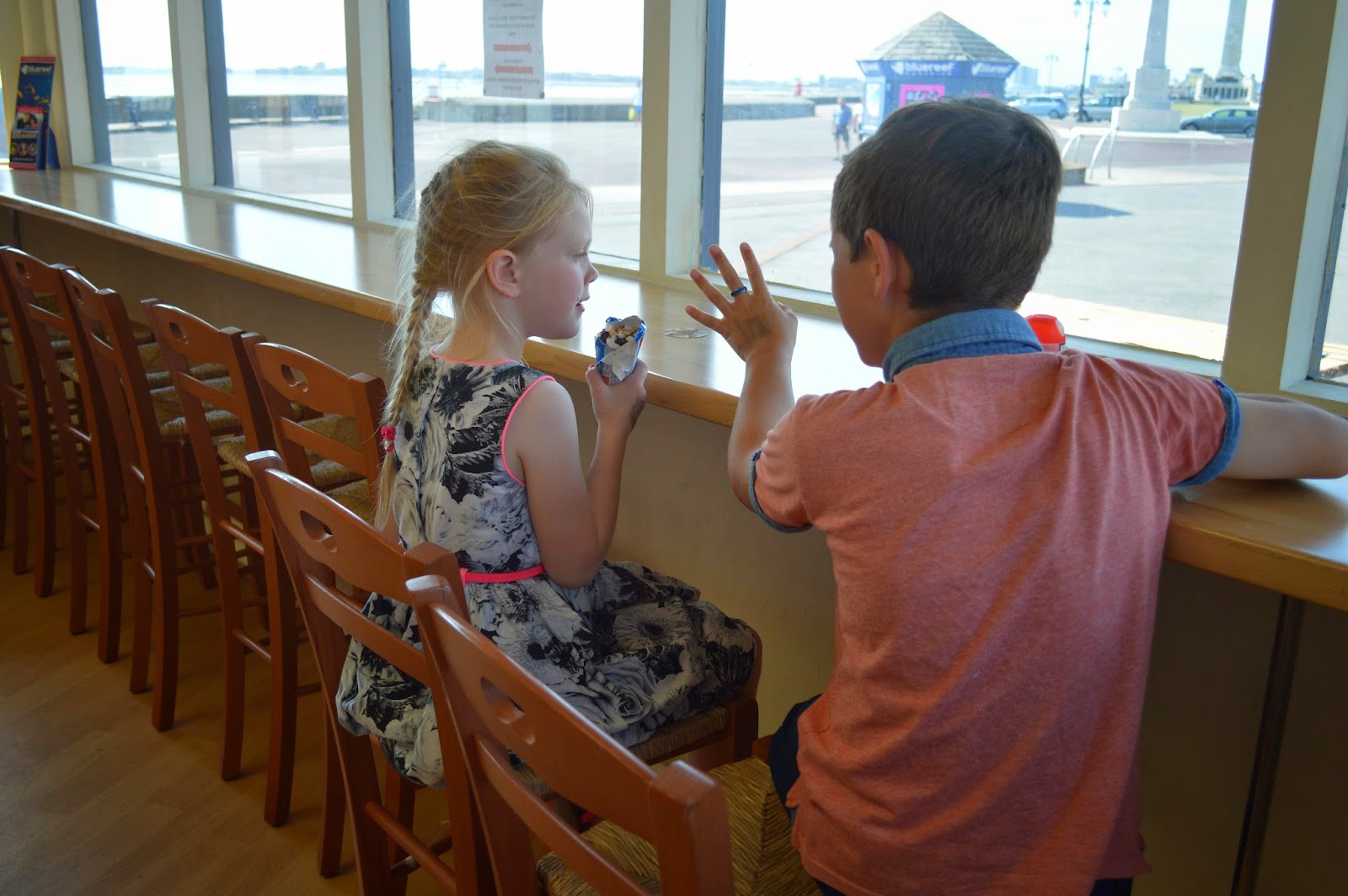 I wanted Katie to feel that the day was as much about her as it was about Pip.  I hope we succeeded in that.  I made them both a beautiful Moonpig card with photos and their adoption dates on each and she brought her adoption teddy that the judge gave her along to the court. Interestingly the bear Pip received was tiny compared to the one she received but Katie generously offered to share her bear with Pip. Katie seemed to be far more bothered by her interplay with our nephew than anything else however.  The day was a constant one-up-man-ship event between the two of them that left my nerves frazzled. TCM said to me that my expectations were too high of the day and he is probably right.

Since the adoption day Katie's behaviour has regressed badly again so there are clearly a lot of thoughts dancing through her brain.  This isn't really a surprise and I was expecting it although, as always, the reality is difficult to manage.  She has been talking about her Birth Mother and generally challenging every single thing she has been asked to do. At her request we have created a smiley face peg chart to move her peg up and down according to how well she has behaved.  This is a very instant way of her seeing that she is behaving in an undesirable way although I'm sure she is confused at the moment and I can allow her a certain measure of kicking off because she must be full of confusing emotions.  I know many adopters have issues with the peg system used in schools but Katie likes the visual and it seems to be helping her to modify her behaviour a bit more so it will probably be a useful short-term tool whilst we get back on track.

As for me? Well I'm getting back to normal after it all again too.  We now have a house move to sort out.  We're moving in 2 weeks time and the work to extend our house and rebuild the upstairs will commence.  I have nothing organise or packed so I might be a little quiet on the blog for a week or two whilst I galvanise my poor, still exhausted, body and brain into some sort of action.  I'm also feeling a little concerned as to how the children (and cats) will handle the house move but will see how it all pans out before I dive into anxiety over that part of it all. 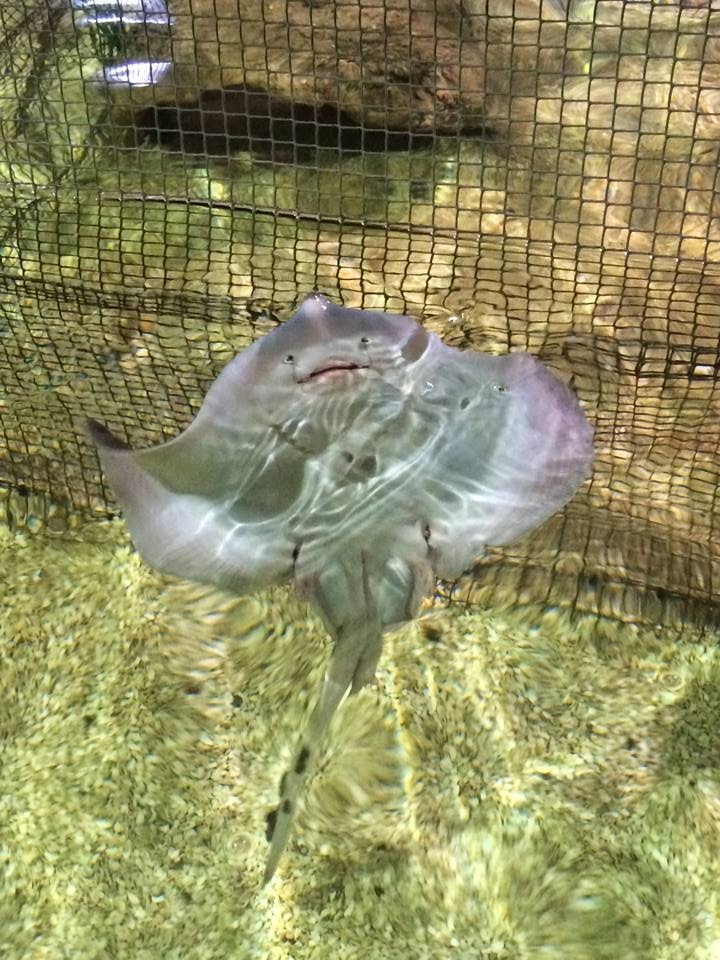