I recently shared a story on Facebook that had been posted on The Adoption Social.  It was an adoption story that moved me to tears due to the positivity about adoption that the writer had. That writer was a lady who had been adopted from Bangladesh.  Here's the link to the story.

On Facebook I noted how sad I was at being called a child stealer by someone who I thought was a friend and how much negativity and anger around adoption there is on the internet and social media at the current time and how much I need to hear some positive stories from adopted people.  I was delighted to have some lovely responses on Facebook and Twitter and even more delighted to be contacted by a lovely lady who wanted to share her positive story about being adopted. I do think we need to have a realistic understanding about adoption so we can best support our young people but equally we can't live in a constant state of anxiety about whether we are getting it right or not because we then risk not giving our children the gift they deserve more than anything else in the world, unconditional love; a love that is the same love as all children deserve; a love without being afraid of what the future may hold; a love that will support and stay with them throughout their lives and help them be all that they can be.  Love isn't always enough to overcome a traumatic start but it can support our children to learn to love themselves as well.

Without further ado, take a moment to read this wonderful story......

So I am adopted... And I honestly couldn't think of anything better to happen to me. I have 2 fantastic parents who have given me more love than my "biological mother" could of.

I have always known that I was adopted and I first was told when I was 2 years old. I know that may sound quite young to some people but my parents had always said that they wouldn't hide it from me, which I am so grateful for. It came about because I asked my mum if I came out of her tummy and she calmly replied " no you didn't because I have a poorly tummy" so at 2 years old I was happy with that response and just toddled off and carried on playing.

The reason why my parents were so open about me being adopted is because my adoption was a little complicated. One of my adoptive parents is related to my birth mother. So this did make the adoption process harder for my parents as people were concerned about how I would react to find out that a certain member of my family is on actual fact my birth mother.

I can't say it has affected me knowing my adoption was within the family as such, it has just thrown up some questions that only my birth mother can answer, but at nearly 28 I have made it this far without the answers so I don't think it will make a drastic change to my life now.

I suppose in one respect I am so lucky because I still know one half of my blood family, which is amazing :) although it does mean sometimes I feel like the black sheep of the family at events because obviously this isn't something that was hidden from any of the family. Saying that though, I don't feel like I am missing out on anything and I have had a fantastic upbringing and I think they are truly amazing people for giving me the most precious gift that parents can give a child and that is love and time, which I have had in abundance!! 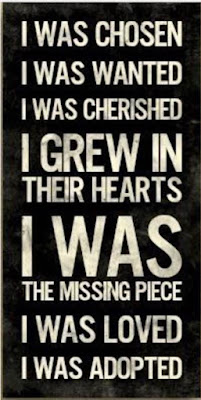 My thanks to this lovely lady for sharing her story.  I had a few tears when I read it and felt a renewed sense of hope for my two little monkeys about how they might view being adopted

Do you have a positive story you would like to share? If so then I would love to hear from you at threebecomefour@gmail.com