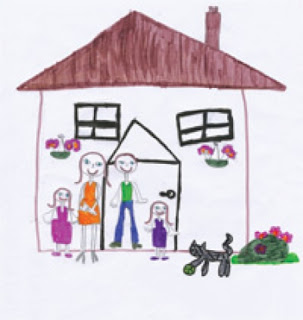 I'm sitting in Pip's bedroom on the first night back home waiting for him to go to sleep for the first time in his car bed. He's anxious but exhausted. I can hear his breathing regulate and deepen as sleep overtakes him and I reflect on the journey that has brought us here.

Even though we are living in a house that's still incomplete and there is dust everywhere irritating my asthmatic cough, I could feel the knot in my stomach loosen as I walked in through the front door.

It's been an horrendous year. One I'd mostly like to allow time to quickly fade; to blot it out; to reflect on lessons learnt swiftly and acknowledge my own 18 month inner journey briefly. I learned a lot about emotional and financial stability and how they effect me. My marriage has been battered from all the stress of bereavement and house building. I've developed a lot of confidence in negotiating for materials and I hope those skills will help me move forward positively and more assertively in some of my relationships. I feel tremendous guilt that our decision to uproot and move the family, whilst we fulfilled our dream of renovating and extending our house, has impacted on the children's stability, especially Katie. Pip takes things in his stride far more than Katie does although is currently experiencing some pre-verbal regression after the move. For Katie the reappearance of the packing boxes wound her up like a ticking time bomb that speeds at triple time towards its ultimate conclusion. Even Jack Bauer would struggle to diffuse the bomb in time. She's wired constantly, speaking fast, whistling, singing constantly in a frenzied pitch. The only saving grace for Katie has been the introduction of melatonin at bedtime. It's impact has been nothing short of revolutionary, sending her to sleep within 45 minutes and returning the evenings to myself and TCM.

I'm hoping that the mammoth increase in space will calm all our souls. I feel more peaceful even when walking through the dust and the shell of a kitchen the builders are currently installing. Now I have finally cleared, cleaned and handed back the keys on the rental house I can breathe a deep sigh of relief. Walking around the almost empty rooms I realised I felt no emotional connection to the house whatsoever. I spent the year disconnecting from a lot of painful feelings and somehow I've now got to feel a sense of reconnection to the world. We existed in that house. We did not live. It's hardly surprising we're all emotionally battered and bruised and are finding it hard to understand each other.

It's now three days since we moved home. I have no internet so I'm writing blog posts whilst sitting in with Pip as he falls asleep each evening. Three days has definitely started to do something to us all. After two awful days with Katie and a bed wetting on the second night there has been a slight change in her behaviour this evening. She sat and played with some toys in the floor in her room, making up a storyline with her dolls house and some of Pip's WOW toys. They've both got WOW advent calendars as I just didn't have time to make mine this year. Although Katie is a little too old for the suggested age range for the calendar I had a sneaking suspicion that getting them both something similar might be a good idea this year. So far I think I might be right. To see her playing calmly and imaginatively was a little blessing and gave me a little bit of hope that this house might be working some magic on her as well.

Pip has realised we're staying here now and is clingy and fractious and tired. He is enamoured with all the Christmas lights and we take a walk each evening to look at the local lights. He spends all day arguing about when it is time to see them which is hard as he reverts to a pre-verbal state for this. Lots of grunting and groaning and melting down on the spot. He's sleeping better though and actually slept through the night for the past two nights. He's generally an easy child and it's easy to miss his feelings. He's not right at the moment. Our routine has been interrupted and there are builders in the house constantly making our usual chill out time a challenge. He needs some quality time with me I think. My days are busy and it's hard to offer him that at the moment. I try and take him out of the house when I can to spend some time together but it won't be easy for the time being to really relax together.

Katie is doing really well, albeit still fairly confrontational. I had an unexpected heart felt apology for a transgression tonight which was a lovely surprise. She had an INSET day on Monday and we had a girly lunch and I bought her some new boots. She's chuffed to pieces with them and seems to be remembering that we can actually be loving towards each other.  It's a strong reminder that she needs time alone with me.

The children love having the builders around and rush around the house getting involved with everything. Pip helps the builders and is noticeably calmer when Katie isn't about but they are both sometimes dangerously hectic together. I find itvery stressful having the house in such chaos although it's still a more positive chaos than living in the rented house. The builders work until the children's normal bedtime which is resulting in later bedtimes and consequently more emotional children. Pip is taking longer to go to sleep and needs me close by. There is a sense of shifting and changing and progress and possibility however. It's early days though and I'm not expecting too much from the children. A house move plus the Christmas build up do not make good bed fellows.

We're home. Things can only get better, right?