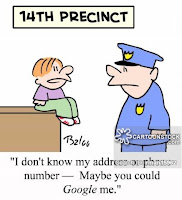 Today I lost Pip for about 5 minutes.

We were watching Katie's swimming lesson at the pool and one of the mum's from school popped over to say hello just as Katie's lesson was finishing and it was time to go down from the viewing area to meet her in the changing rooms. Pip, who, was restless after half an hour of staying in one vicinity and has been a bit of a pickle just lately with running ahead and not stopping, started walking off down the viewing area towards the stairs. I called him back but he continued walking on and disappeared around the corner. I grabbed our bags, said goodbye and speeded after him expecting that he would just be looking at the little pool from the window there.

There was no Pip anywhere to be seen.

I called him loudly. Years of parenting Katie has enabled me to shout loudly when required (not a fact I'm proud of but most parents can embrace their inner fishwife when required I'm sure).

No reply. No shuffling of size 10 feet. Nothing.

I span around, sweeping the area visually with panic forming in my stomach.

I raced downstairs. My instinct was that he'd gone back to the poolside to meet Katie but what if I was wrong?

At the bottom of the stairs in the reception desk. I saw the swimming coordinator and asked if a little boy had come down the stairs wearing a red jacket. I quickly gave a description of him and the rest of his clothes including his Spider-Man trainers and she put an emergency alert out to all staff for him.

Staff appeared from everywhere. Within seconds the doors were manned and staff were looking for him.

I'm not sure I can articulate the fear and panic that I felt. Was this really happening?

Giving an impression of someone calm(ish) I told the swimming coordinator that I was going to quickly check by the changing rooms to see if he was there.

I rushed frantically to the changing rooms, wildly calling his name.

I turned the corner to the pool entrance and there was Pip standing looking very nonplussed and relaxed in his orange hoodie (not a red coat) and actually rather pleased with himself for finding the poolside to wait for Katie. Although my instinct was correct as to where he'd been headed and I'm secretly a little bit proud of him for finding the way unaided, I was still flabbergasted that he'd managed to get there so fast.

I rushed over to him and gave him a "panicked and relieved all at the same time" ticking off before hugging him and explaining to him that I was scared that I'd lost him. I was also suddenly feeling an utter numpty for forgetting he wasn't wearing his red coat and I'd given the wrong description to the swimming coordinator. What sort of mother forgets what her child was wearing? He had been wearing the red coat all day in my defence and I'd left it in the car because we'd managed to park so close to the leisure centre entrance for once. What if he hadn't been there and had gone past the staff because I'd given the wrong description? It doesn't bear thinking about.

My mind was awhirl with fear and relief and panic and delight and embarrassment.

"I sorry Mummy" he said with a sweet little face, interrupting my thoughts, and my panicked heart melted. I hugged him tightly again.

We quickly raced back to the reception staff to let them know he was safe and to explain my new numpty status and apologise for being such a plonker and rushed back to meet Katie.

Katie gave him a telling off as well once I'd recounted the story to her although that is a case of the pot calling the kettle black because it wasn't that long ago she gave me the slip in the egg aisle Asda (I'm an observant mum I promise. I just have two children who think they can go where the mood takes them). I saw her give him a sneaky cuddle though when she was getting changed and suspect she really does care for the little monkey, even if she does continually call him a "Nut burger".

Because Pip has made a habit of running off just lately, and I have to keep checking with him whether his ears are working, I've told him he's back on his reins now until he learns to stay with me.

What a scare! Thankfully it proved my instincts about my son's intentions were strong but also proved just how much ground he can cover in a very short space of time. 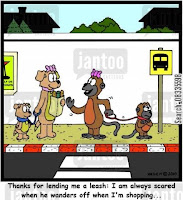