There's something soothing about being the only one awake in the house in the middle of the night. Well, when I say "the only one" what I technically mean is that I'm sitting in Pip's room trying to get him back to sleep after I accidentally woke him whilst putting his duvet back over him.
As I tiptoed out of the room his little head popped up and a voice said "Don't go mummy".
My heart just melted. I could read so much into those words.
"Don't go mummy"
I'm possibly reading more into those words because I'm currently reading The Primal Wound by Nancy Ferrier. It's a book that is literally ripping my heart out from my chest both with enormous sadness for my children but also for myself as I open up my heart to feel the loss of my own mother and our estranged relationship in order to fully understand the loss of the bond my children have had with their birth mother. I've had to put the book down over the past week to spend a little time understanding my reaction to the book and to settle my heart again. 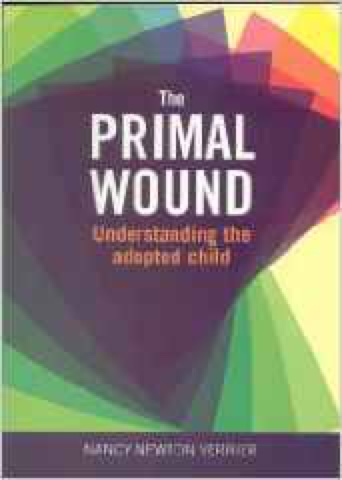 When I hear my son sleepily yet urgently saying "Don't go mummy" in the middle of the night my heart breaks a little because I know he needs me close to feel safe enough to go to sleep. Is he really asking me not to go or is his sleepy heart calling longingly for a mother he knew only for a short time? I expect it's a little of both.
If you met Pip you'd probably think he's mostly unaffected by his early loss and adoption . He's happy and smiley and full of cheekiness and mischief. He's well attached and loving. He's fun to spend time with. He loves tinkering with things and will happily play with his toy kitchen or tool set keeping himself busy. He's bright and very switched on. His speech has caught up now and he can count and do all the things regular 3 year olds can do.
There are little things that I know though, like the fact that he's started speaking in baby speak when I change his nappy partly because we've moved house and partly (I suspect) because I've been talking to him about saying goodbye to his nappies. Part of him wants to be a big boy but conversely he tearfully told me last week he doesn't want to be a big boy and he wants to be a baby and stay in nappies. Pip has always felt younger than most of his peers. He's growing up fast and gaining independence but he's very much a baby still. I feel he needs to be babied for a while longer so I'm not going to argue with him. We'll try the nappies again in a few months time when the weather is warmer. He's taking little steps to emotional independence so I feel confident he'll get there in his own time. Over the past week he's slept all night in his own bed nearly every night. This is a major step forward after nearly 18 months of creeping into our bed in the middle of the night for cuddles. To me this shows he's feeling more secure and sleeping more soundly (except tonight when the mere act of pulling the covers over him was sufficient to wake him). I'm enjoying some better quality sleep as well.
So do I mind sitting on the chair in his room in the still of the night listening to him breathe and yawn every now and again and making little huffing sounds like he's holding his breath for a second? Not at all. I'd like to be doing the same in my bed and I will admit I'm now getting a bit chilly and dreaming of having a warm duvet wrapped around me. I'm also feeling a bit cross that Leo the cat has just jumped on Pip's bed disturbing him again and setting us back at least 10 minutes or more but I'm happy to offer him the comfort he needs. I hope that if I can get it right now, whilst he's young, and try and help him feel safe and protected we can go back in time in his emotional development and heal some of those wounds and losses and insecurities and maybe I won't have to spend time sitting on his bedroom chair writing, in the middle of the night, to reassure him back to sleep.
What shall I do now I've finished writing this post? Thank heavens for my IPad, there's lots I can do to keep myself awake.....
I've linked this up with #WASO over at The Adoption Social where you'll find lots of fantastic adoption blogs to read.
Email Post
Labels: adoption Sleep Issues