Life is a Roller Coaster.... 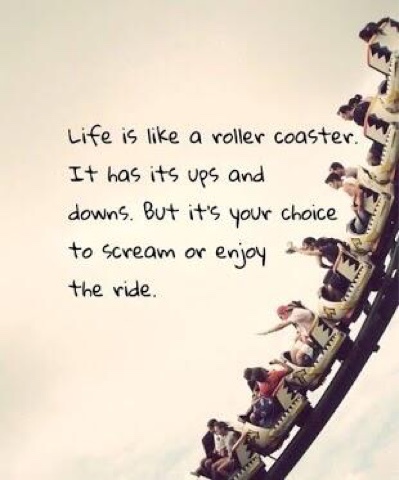 I'm not sure what particular planetary alignment is going on or whether the solar flares are weaving some sort of magic spell but my children are on another planet at the moment.
Actually I'm at the stage when I'm wishing I was on another planet. I keep thinking about the scene in the film "Parenthood" when Steve Martin is watching his son destroy the school play and feeling like he's on a roller coaster. I want to skip to the part when he lets go of all his expectations and anxieties and just laughs uproariously at his son's antics.
Katie's behaviour bulldozes along the paths of "I don't care about anything"; "NO I'm not going to do a single thing you ask me to do"; If you do ask me to do anything I'll pretend I haven't heard you or I'll run away laughing manically (one of my personal favourites) and "I'm going to act like a 2 year old in all my emotional responses". The precise reasons for this have not been confirmed. I suspect there are some emotions simmering about her birth mum currently because she's looking in her memory box a lot.
I've tried asking her what's wrong but can a 2 year old really tell you what's wrong? I've tried wondering if she's missing her birth mum and wanting to talk about that. I've tried cuddles. I've tried yelling back "I don't care that you don't care" (not my finest hour but we were really late for school that particular morning). I've asked if everything is ok at school. Is she playing with her friends? Is she happy with her lessons? According to Katie everything is fine. Eventually, wondering if she just doesn't know why she's all over the place I told her that the doctor thought she had ADHD. Interestingly, after some initial anxiety, I'd say that chat has had the most impact and she seems calmer. Maybe on some level she knew that our visits to the paediatrician were more than just talking about her sleep. I'm not going to tell her about FASD until she's much older. The emotions linked to that are so complex that I think it might be too damaging for her. ADHD she's heard of. It's something tangible that we can openly use to explain her reactions and help her understand why she behaves the way she does and how her brain works. It's something almost outside of her that we can discuss without her carrying the burden of responsibility at such a young age.  The explanation of the physiological cause of it all is not really important currently and can wait.
Pip is 3 and (to return to the film Parenthood again) he's good at it. He's in full "copy my sister" mode; practising a few swear words and walking around saying "butthole willy" and "penis" on a loop (thank you Katie for teaching him those) and refusing to do anything he's asked. He distracts himself from his willy obsession by either asking "why? why? why?" on a loop or throwing himself down in the floor at every opportunity shouting "That's not fair (or "ware" with his pronunciation) every time he experiences something unjust. The competition of fairness between Katie and Pip rages on during all waking hours. "She's had a biscuit. That's not fair!" "Yes but you had your biscuit before we collected Katie from school Pip" "Nooooooooo it's not fair" *falls on the floor crying*
You get the picture.
Pip's level of cheeky naughtiness is reaching fever pitch currently. He cannot stand still for a moment and is like a caged animal. He's on a curfew after the whole getting lost incident last week so has to hold my hand all the time. The phrase involving the words "lead" and "balloon" describes his response to this turn of events. He's slowly understanding though and the past two days has brought a willingness to comply on the hand holding front at least although, obviously, it's not fair. Two visits to the vets with Willow and Leo for their annual check ups has left Mummy with a very red face though as he buzzed about in an over-excited hyperstimulated fashion, touching everything in the consulting room and ignoring my pleas to stand still. A particular high point was when he took the key out of the consulting room door and threw it into the waiting room, much to the amusement of the people waiting. I retrieved the key and smiled brightly at the eyes of judgement staring at me and muttered about the fact that he was 3 and exceptionally good at it. Add this to him knocking over the yellow "Wet Floor" sign and tripping over the lady in front of me in the queue and you'll understand why I was glad to leave there. I'm sure I could hear the sound of that roller coaster following me. At home he vanishes constantly which with builders in the house isn't safe. I turn my back and he's gone and can generally be found flushing things down the toilet or tipping the contents of anything he finds on the floor or trying to run out the front door to find the builders. My brain hurts from second guessing what he might do next and the fear of what that thing might be. 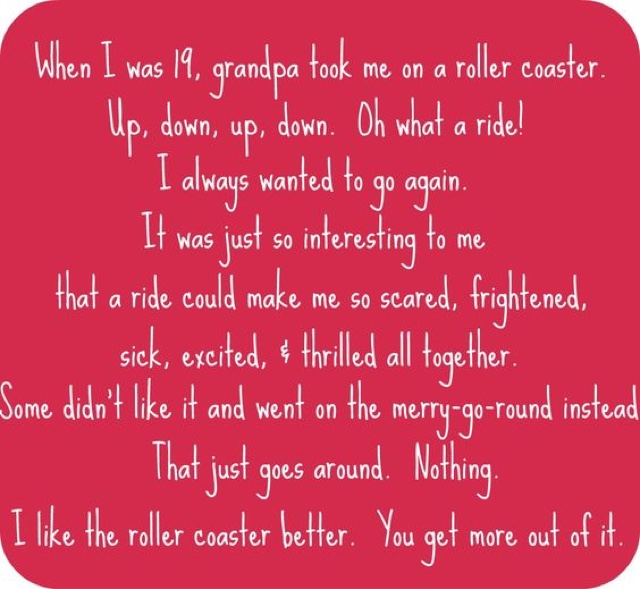 Maybe I'll just let that roller coaster mow me down and be done with it. I'm trying to find it all funny, I really am but I think I any humour might be tinged with an edge of madness. If I go quiet for a while it might be because I'm rocking in a corner muttering "It's just a phase" in a manic attempt to reassure myself that this is all transient and before long they will have both moved on to a new phase.
I look forward to the next one.....
Email Post
Labels: ADHD adoption Parenthood