Keeping abreast of the situation..... 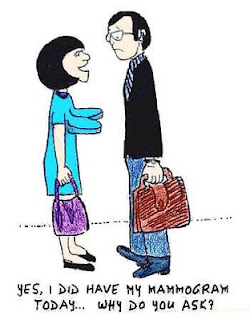 Last Monday I had my first ever mammogram after being selected to take part in the early screening programme for ladies under 50. I've lost a friend to breast cancer and have several other friends going through treatment or are in remission so there was no way I was missing the appointment.

The actual appointment itself was very quick, if rather weird. The little unit is well kitted out and as welcoming as a mobile unit can be. I had to whip off my bra and leave it in a small cubicle and was called into the screening room with a large X-Ray machine. I then had to remove my top half and hand my body over to the Radiologist to position me in four different positions and squish my boobs onto a plate/ledge whilst another plate came down on top of the breast and pressed down. Let's just say my breasticles have never been squashed in those positions before. I was secretly grateful I'm in a chemical menopause because pre-Prostrap injections I would have wept with pain from my hormone ridden booblets. The fourth X-Ray was the most uncomfortable for me and I will admit to closing my eyes and focusing on breathing slowly and counting until it was over to distract myself. 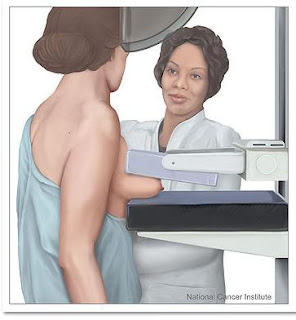 And that was it. I popped my clothes back on and the Radiographer explained that if they needed to see me again I would receive a letter. She said that lots of ladies are recalled the first time and often there is nothing untoward to worry about so don't be alarmed if I received a letter. I walked back to my car wondering if that was just a spiel she gave to everyone or whether she'd seen something on my film. I did a quick check of my boobs at home to see if they felt OK. Everything felt the same as usual so I put the mammogram to the back of my mind.

It turned out I could only put it to the back of my mind for a few days because a letter from the Breast Screening arrived last Thursday with a recall appointment on  the following Wednesday (today).

A nervous wait followed. I did lots of research and then did very well at distracting myself and ignoring it all until last night when fear flooded in and the nerves caught up with me. Sleep didn't come easy last night as I worried whether my oestrogen patches were causing problems. I felt anxious and stressed this morning, made worse by never-ending arguments about going to school (that's a whole other post) and I kept a brave face on whilst doing the school run.

I decided not to take anyone with me to support me,  I know that if there was bad news I would want to take it in myself and not feel I had to make anyone else feel better.  I decided to take my iPad with me to my appointment instead and try and write this blog post as the appointment was unfolding to share step by step what happened and how I was feeling.

I'm very much a pragmatic person. I don't really sensationalise my life. If I have cancer then it's here and it's real and I will focus on what's next. If I get the all clear I will hug my life a little closer to myself kick start all the changes to my health and diet that I've been thinking about for far too long. 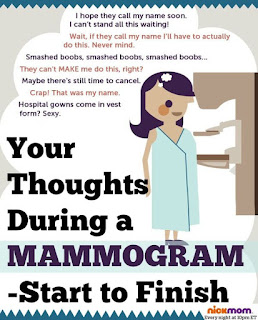 I arrived at the breast screening unit and I barely had time to retrieve my iPad from my bag when I was called into a room.  I met with a nurse who told me the mammogram highlighted something on my left breast that they wanted to investigate further. Blimey! That freaked me out.  It wasn't just because I forgot I shouldn't wear deodrant for the first mammogram then?  This was real!

I was whisked away to have more X-Rays and, whilst waiting for my turn, I had a wonderfully distracting chat about the beautiful colours on my t-shirt which led to topics of colours in the home and chakras; meditation and Angels with another Radiographer which really helped me relax and keep perspective as I waited in the waiting area.

I was then called into the X-Ray room.

I had 5 new X-Ray's taken of my left breast in some different and exciting positions from the previous mammogram. There were a few eye watering moments and some muttering about 50 Shades of Grey. The Radiographer really had to get up close and personal with the girls.  I tried to relax and told her to position me where she wanted me. It all felt a little surreal if I'm honest.  How was this happening to me? I was stood there naked on my top half with a plate squeezing down on my boobs trying not to worry about what they might actually find and thinking about my friends who have been in the same position and had bad news.

Within 10 minutes I was back in the waiting room where my attempts to write were overshadowed by a far more interesting conversation about the broken radio speaker, Led Zeplin, Paul Weller and BBC Radio 2's Pop Master quiz with a couple in the waiting room. I was very relieved that the waiting room was generally quiet though and I wasn't being forced to confront what might/could be in graphic form. I'm not sure I could have handled that. Too real! I watched a few people come and go and wondered what their story was and how their visit to the unit would end as I waited for the doctor to give me my results. 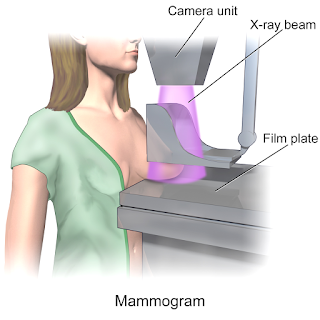 I did't have to wait for long as I was called to see a lovely lady doctor and nurse. Actually I do want to say that everyone at the unit was simply lovely.  They are fantastic people doing what must be a tough job at times.  They were gentle and caring and compassionate and easy to talk to.

The doctor showed me my X-Rays and highlighted the area that had led me to be recalled. It was quite shocking because there in my left breast was a little white circle that looked very much like a lump. The doctor said that they felt that the cause was the fact that my breasts are asymmetric and the breast tissue was denser in the left breast.  To be totally sure all was as it should be she wanted to do an ultrasound of the breast.

My experience of ultrasounds is not good.  15 years of infertility taught me that one good ultrasound was generally followed by one that broke my heart so the butterflies in my stomach soared at this development.  After getting undressed again I lay quietly on the bed on my side with a pillow behind my back and my arm above my head whilst the doctor applied the cold gel and started to scan.  I tried watching the scan to see if I could see anything obvious but it all meant nothing to me.  She seemed to be scanning for ages and I started to get twitchy. When the doctor asked me if I was OK I explained about my infertility history and my experience of ultrasounds and that, in my experience, no good comes of ultrasounds.  The doctor was very caring and talked about what she was looking at. She then explained that she had found a cyst and felt happy that it was nothing more sinister but that she wanted to drain it with a needle to be sure.  She told me that cysts rarely ever cause cancer but they wanted to ensure that's all it was.

I don't have a problem with needles.  Again 15 years of infertility and injections have left me with little fear of the sharp, pointy things.  It was a long needle thought and it was very strange having the needle wiggling around inside my breast. It didn't really hurt but every so often a disembodied internal scratch reminded me where the needle was - a bit like having an itch you can't reach.  It probably took a few minutes before the doctor aspirated the cyst and confirmed that all was fine and it was just a cyst, doing what cysts do - in this case being collapsed! This was good news!

The relief washed over me as the doctor smiled and gave me the all clear.  She reminded me to keep checking the girls and making sure nothing changes. I really don't need reminding to do that after this experience believe me!  Before I left we had a lovely chat about adoption and friends the doctor has who also have adopted children and we chit chatted about life as an adopter.

I then floated home in a daze after thanking all the staff and had a cup of Earl Grey Tea and some gluten-free shortbread.  I'm going to be really cutting back on the sugar after today but I needed a good old British fix of tea and biscuits to help me ground again.

I still feel a little spaced out if I'm honest. I can't quite believe that this happened today.  I am so relieved to have the all clear but there is a little bit of me that's aware of how it could have all been very different and my heart just breaks for everyone for whom the news was very different. 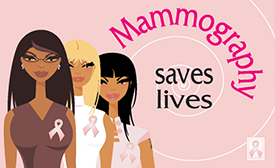