Ok yes I did struggle with the title of this blog post and I will admit we’ve had a lot of giggles ourselves but I didn’t name these adorable little critters. Someone, somewhere with a degree in marketing thought up the name. Amazingly they must still have a job as well! I just have a degree in “my mind is in the gutter”. On a whim we bought Katie and Pip a Fingerling each this week. We’ve seen adverts for them and ooooooh’d and ahhhhhhh’d over their cuteness. We popped into The Entertainer whilst in a local shopping centre buying school shoes for Pip and saw they had a sale on. The cost around £15 so not cheap but not ridiculously expensive. If you’ve not come across them before they are little interactive toys that sit on your finger and make cute noises in response to being touched, stroked, kissed or swung upside down. They go to sleep and make noises rather like the Teletubbies do.  If you put two Fingerlings together they interact with each other. Reading some of that description back really isn’t helping me overcome my giggles about the name of this toy at all. In fact I’m really starting to wonder about the makers of this toy and their programming. Is that really wrong of me?
Ok mind firmly out of the gutter.
Here is Pip with his gorgeous little Baby Sloth and his favourite slushie. 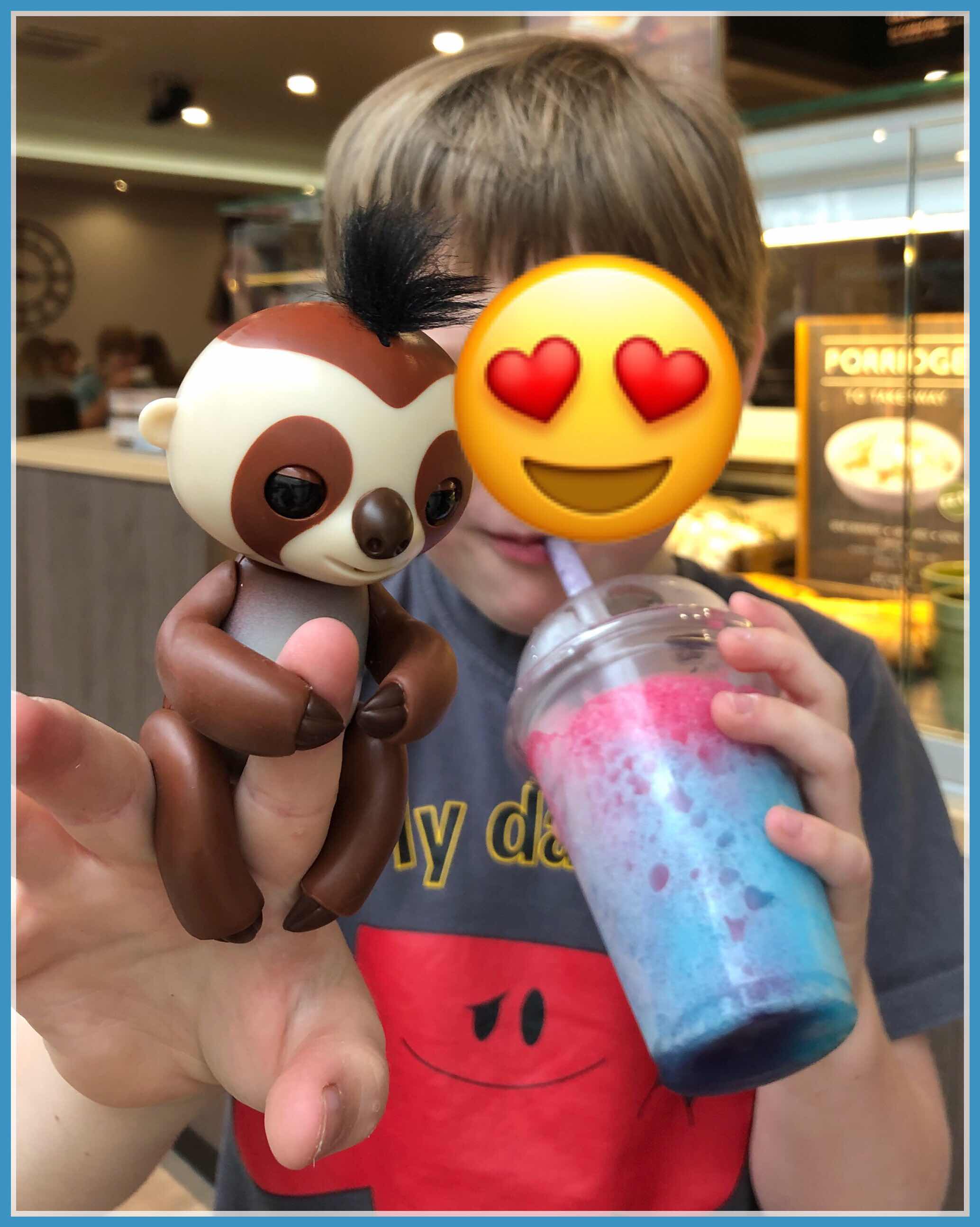 Buying the slushies is a pre-requisite of any trip to this particular shopping centre. The blue slushie HAS to go at the bottom for Pip with the red at the top. Katie has to have hers the opposite way around mostly because she hates Pip copying anything she does. Pip’s little Sloth has slept with him every night since he joined our family. Pip is currently sleeping in a den he has made in his bedroom out of chairs and blankets so Baby Sloth is enjoying sleeping alongside Pip, keeping him company. Because he generally likes to care for his toys Pip has kept the packaging and puts him back in his box to sleep at night. One thing that made us laugh is that if you cover their heads with your hands they make a farting noise. Pip’s Fingerling is one of the older designs and makes a really loud farting noise which Pip thinks is hilarious (and we do too).
Pip loves dens. He goes in this one with his iPad during the day. He’s due a new bed soon because he’s outgrowing his car bed and I think we will need to buy a mid sleeper with a den underneath to meet this need. For his 5th birthday we bought him a den making kit with rods and elbows but it's a bit flimsy and can’t really take the weight of the blankets. Pip has to have a lot of blankets over his dens. It’s quite a “thing” with him that there are at least 5 blankets. I’ve accepted that I can’t get into his room to clean it currently. As long as he feels relaxed and happy I’m happy though. He was a bit anxious sleeping in there the first night but now he has a torch and a light inside he is sleeping well. We can hear him listening to music on his iPad and singing along in the way that 5 year old boys do. He sounds a bit like Vic Reeves doing his Club Singer impression. Current favourite songs are 5 Seconds of Summer “Youngblood” which he sings over and over and over again and “Desposito” by Justin Bieber. On the drive to Devon he was singing along most of the way there and back giving us lots of giggles. 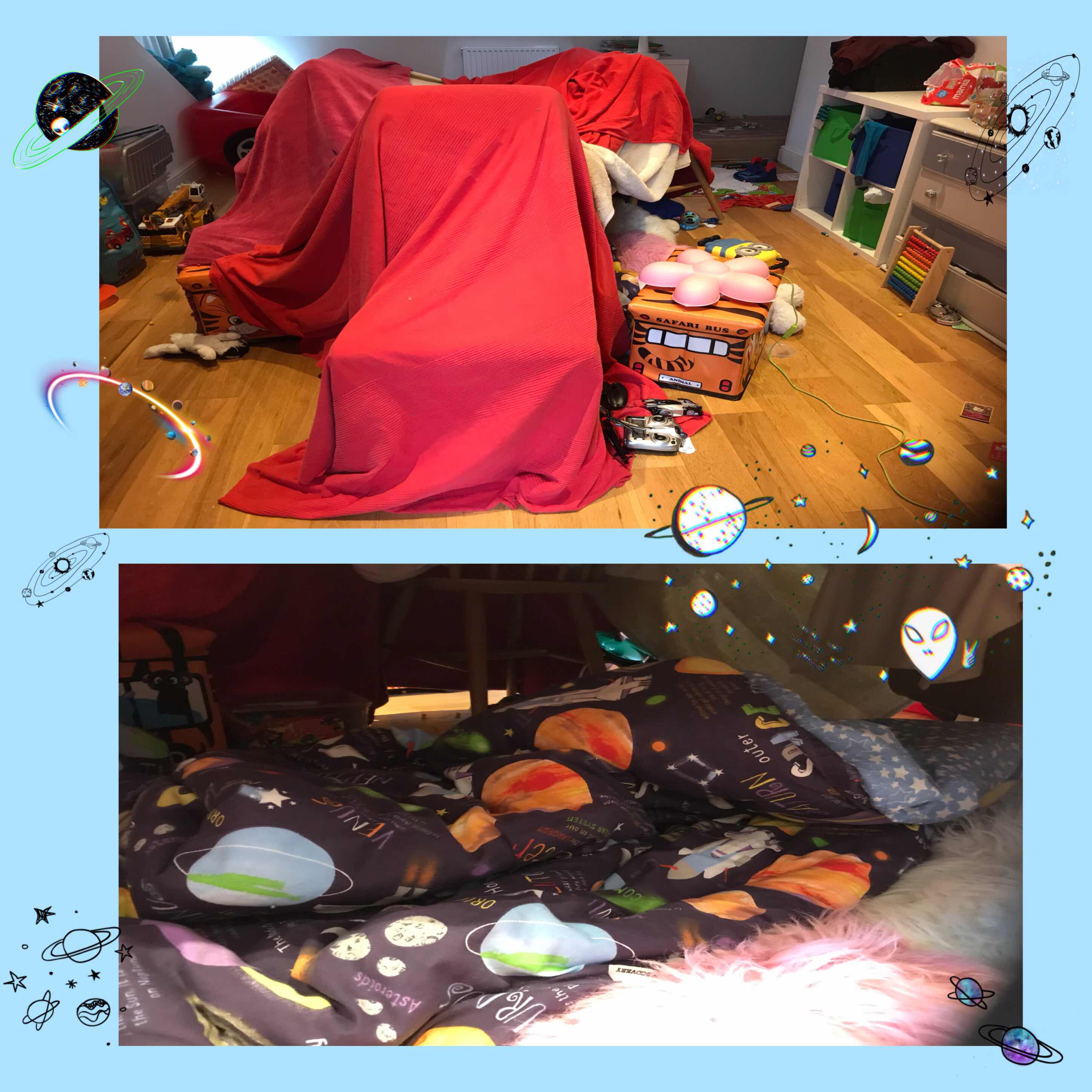 Katie wasn’t with us on our shopping trip. Going anywhere near a shoe shop with Katie brings me out in hives because it’s a long and laborious process. I have to pre-warn the sales assistant that we will be there for some time and it might not result in commission on a purchase.  Shopping for trainers is particularly challenging because she has long and narrow feet and many trainers are wide and chunky. Thankfully we’ve already purchased her school shoes which for once was an easy process. We still have new trainers to buy though but I might need to stock up on Valium before attempting that trip. We took advantage of Katie being at a day long gymnastics camp to whizz out with Pip to get him sorted for Year 1. I love shoe shopping with Pip. He had three choices and was measured, fitted and had made a decision within 15 minutes.
I chose Katie’s Fingerling for her. It was a very easy choice because it was a unicorn called Gemma. She loves unicorns and I’m called Gemma so there was no debate in my mind. She loved it! 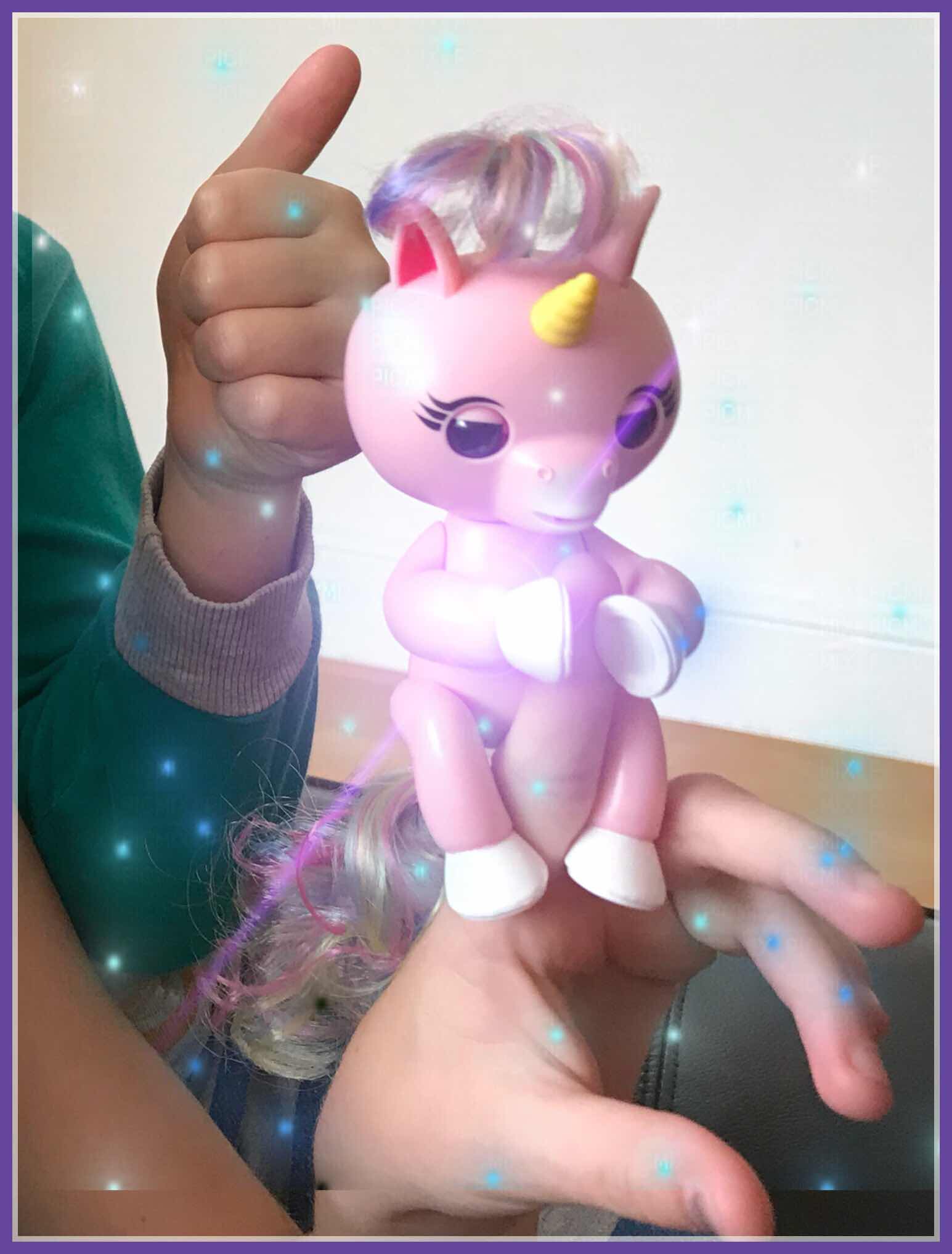 Cute isn’t she? I’m just feeling sad that I didn’t buy one for myself although Katie lets me babysit from time to time so I’m happy(ish). I might have to sneak out and get myself one too. They have a hypnotic, soothing quality about them.  Katie’s feeling a bit disappointed that hers doesn’t fart as long and as loudly as Pip’s but, as we pointed out, unicorns just fart rainbows so it will be much more delicate and magical. The unicorn will intermittently give kissing sounds if you hold it close and make kissing sounds. Gemma the Unicirn is currently sleeping attached to Katie’s door handle. You can turn them off which will preserve battery life (and your sanity). The sounds can drive you a bit nutty after a while. All in all we love our new additions to the family. I suspect we might adopt more in time.
So what’s the silliest sounding toy you’ve ever bought?