ASD and the Snow Day that wasn't! 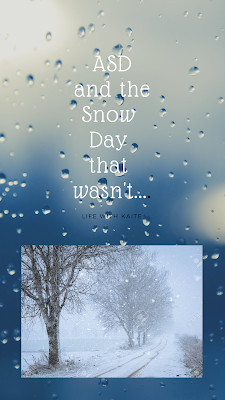 When you are the parent of children with any form of cognitive or behavioural disorder you can often feel like the Fun Police.  You can stand and watch them getting excited over something that any other child could cope with being excited about and feel that sinking feeling in your stomach because you know you are going to be the one that bursts their bubble.  As if that wasn't bad enough you then have to factor in the rigid thinking that goes hand in hand with disorders such as ASD, FASD, ADHD, PDA, RAD and ODD (and anything else ending in 'D').  You get that moment when you brace yourself and try desperately to think of the magical parenting technique that is going to somehow make the whole experience fluid and easy with absolutely no tears being shed (by you or anyone else).  I braced myself last week for one of those times as snow was forecast to hit the UK.

Katie has diagnoses of ARND/ADHD and ASD.  Pathological Demand Avoidance (PDA) has also just been added to the list.  PDA coupled with puberty has been a real ball-buster!  Katie doesn't know how she feels from one moment to the next which heightens all her anxiety and I mostly just feel like I've been whacked over the head with a mallet. We don't know yet what the future will hold for Pip regarding diagnoses.  Both have a lot of sensory challenges.  Pip has a lot of autistic tendencies but my hunch is that it's more attachment related for him but who knows!! I spend a lot of my time guessing with him. Both have the well recognised rigidity of thinking that often goes hand in hand with ASD.

Pip is like a mini weather man.  He loves to consult the app on my iPad to find out what the weather is going to be like and this goes into overdrive if there is the possibility of snow.  He's only actually experienced snow once in his life, when it snowed last year.  The last time it snowed where we live before that was the year that Pip was born, so it doesn't really count as he was only a few months old.  Last year we had proper snow days from school and were able to go sledging down our hill so in the children's minds that is what would happen again.  I'm sure you can imagine the excitement that was mounting with every second that passed as the time drew closer to 7pm when it was due to start snowing.

I'm not sure if it's the case with all children, but there something that happens in sleep between the words "possibility" and " certainty" and this is where the problem lies.  By the time the children woke up the next morning Katie's brain had decided that there would be a snow day and there was nothing anyone could say that could help her think otherwise.  There had been snow overnight.  There was enough to turn the world white but (in my opinion) not enough to close the local schools sadly.  We woke up at 6:30am and it felt like a very long hour of watching the websites for updates; seeing the schools in the north of our county confirming their closure and  hypothesising (me) about whether our schools would be closed before confirmation came that both our schools were considered safe to open. 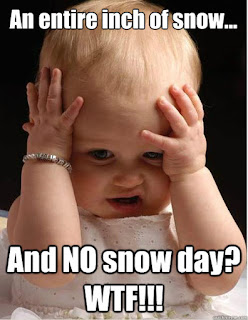 Oh the crushing disappointment! (from the children, not from me because I had clients booked in and a lot of work to get through that day).

After the crushing disappointment came the denial and the rage.  Katie's brain could not process the information and lashed out.  It was my fault!  I didn't want them to stay home!  Where was the email confirming the school being open?

Somewhere in the rage came the begging for me to let them stay home anyway.  For the reasons stated above I said No.  If I cancel appointments I lose money.  I was probably the most unpopular person in the planet and I was told that in no uncertain terms.

Next came the total refusal to go.  I was sworn at and called a whole plethora of interesting and rather uncalled for names.  Lots of door slamming and stomping about ensued.  This is hard to manage.  I now know that this is actually a stress and adrenaline induced panic attack due to PDA but knowing that doesn't actually make it any easier to manage the behaviour if I'm honest when the rage and inability to actually follow direction is being directed at me.

As if all that wasn't bad enough the schools had very kindly suggested that children could wear their own clothes if they were warmer than their school uniform (probably said to cushion the blow of having to go into school - "hey kids at least you can wear your own clothes!").  I was debating whether to give out this piece of information but Katie HAD to read the email from school to prove the school was open and saw it.  Why was I worried you might ask?  Well I was worried because I knew the anxiety that was going to hit in 5, 4, 3, 2, 1

It was close to 8am by this time and decisions were required.  I was feeling pressurised.

I offered to pose the question on the local Facebook group of parents in her school year.  Pip was actually happy to wear his own clothes as suggested by me but was still unhappy at the prospect of school rather than making a snowman. 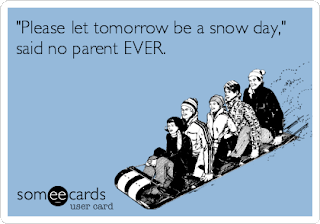 By this time I just wanted to lay face down in the snow in the hopes it might cool my internal barometer down.  My head was starting to hurt and I was feeling very frustrated and unable to think clearly.  Creative parenting was lost in the constant shouting and door slamming I'm afraid.

Thankfully some responses to my question on Facebook started to appear.  It was a mix between uniform and own clothes.  A few jokes about the girls wanting to wear midi tops helped me feel like it wasn't just our house that was in disarray.  I relayed the information to Katie and gave her the choice.  Choices can be very stressful as I'm sure you can imagine.  She decided upon her own clothes which then led to the next stressor.

Which clothes to wear?

I gave many helpful suggestions that were shot down in flames and Katie made a few suggestions along the midi top concept which were vetoed by me.  The anxiety raged.  We edged towards school time finally making a decision and I braced myself for the debate over footwear.  What would other children wear?  I sensibly suggested wellies for the walk and trainers for once they were at school. You could see the anxiety rising at the fear of getting it wrong.  My reassurance was responded to with being called a "fucker" (which I felt was a little excessive if I'm totally honest).

It would have been easier to just let them stay home and I might have done that if my diary was free from clients that day.

School had very kindly given us an extra hour to get to school to ensure we arrived safely.  Considering we live next door to the back entrance of one school and an 8 minute walk from the other I do feel that we had no real excuse not to get there roughly on time but I knew there was no hope in hell of getting there on time.  We had to walk round to the front of Katie's school which took about 20 minutes because of the snow ball fights between the children which I tried to be cool about but knowing they would be sitting in wet clothes at school made me twitchy because both children have sensory issues.  I don't think Pip could have walked any more slowly to school and I felt sorry for him and my constant chivvying along.  By the time I had dropped both children off at around 9:30am I was ready for a lie down in a darkened room, very much at odds with the relaxed nature of my Reiki healing practice.

I often try to explain what it's like to parent my children and I really don't think people ever get it.  I have heard that I need better boundaries or I'm not strict enough or kind enough or I make excuses for my children.  I'd like to see them navigate their way through days like this.  Oh I should just mention that this is pretty much every day in our house.  The snow just provided a good example to write about. 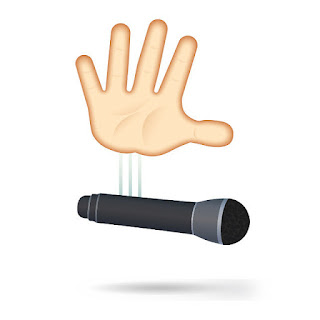