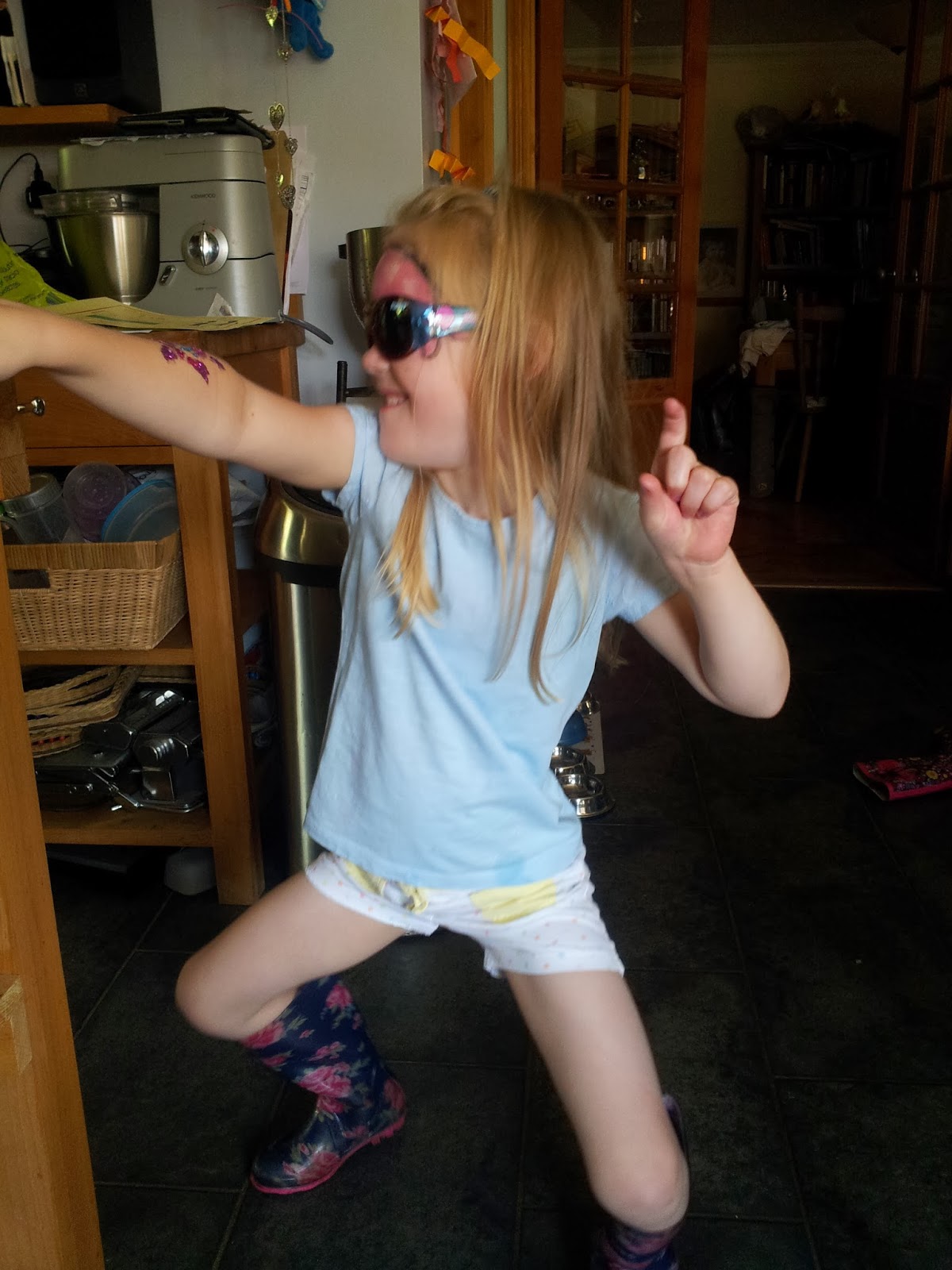 Anyone who has met Katie will tell you that she isn't the shy and retiring type.  She's a whirlwind; a force of nature; you definitely know she's about.  She has very selective hearing and thinks she can pretty much do whatever she wants.  Apparently she's "allowed" although we are still trying to work out who it giving her permission because it's certainly not myself or TCM!  She's utterly delightful most of the time but I've come to realise that this negative behaviour is her way of controlling her environment.

I've often said that Katie is in perpetual motion.  Sitting still isn't something that comes naturally to her.  She can be forgiven, after all she is only 6 years old.  She's just about getting to the point where she can sit and watch a film at the cinema without needing to get up to the toilet endlessly or sit and do some drawing.  To be honest though, when Katie is quiet you generally know she's up to something that she shouldn't be up to!

There are currently two issues that are causing stress in the Katie household.  Firstly there is Katie's need to be awake before 6am and secondly is her current need to steal things from my handbag and the cupboards so we're on a mission to try and address both these issues.  I could add lying constantly into this mission but I've realised that most 6 year olds confuse fact with fantasy and lying is a normal part of development at this point in her life.  I'm just saying to myself that she has a very big imagination at the current time.  That doesn't make it any less frustrating though particularly when she's claiming, often with convincing tears, that she hasn't stolen my lipstick.  You know.... the lipstick that I apparently dropped in her bedroom?

The early rising is an issue for TCM and I and started the autumn the clocks went back when she was just turning 3 years old.  We had a whole winter of 5am that year.  It's a bit better now but I think, at 6 years old, Katie is now old enough to amuse herself in her bedroom until a more socially acceptable time.  Katie doesn't feel that she can go that long without ensuring the rest of the house is awake however so we're experiencing a clash of the Titans.

We've tried various things over the past few years.  She's had a GroClock for the past 2 years.  The aim has been to get her to stay in her bed until the sun comes up.  More recently I added the digital feature onto the clock and said that Katie had to stay in her room and read or play quietly until the clock says Seven Zero Zero.  It doesn't help that our GroClock has developed a mind of its own and the sun comes up early most days but Katie still refuses to stay in her room.  We've tried letting her go downstairs to watch television, which is her preferred option, but she has been also putting that time to misuse and climbing onto the worktops to get at chewing gum stored high up in a cupboard or try and raid the sweetie tin. As this is a safety risk and Katie isn't willing to desist with this behaviour she is no longer allowed to go downstairs and watch television first thing in the morning.  We've tried letting her get into bed to snooze with us but she just kicks and annoys TCM and I until we both get cross and she is put back in her bedroom or all hell breaks loose.  I've been leaving her Hudl on her chest of drawers which helps a bit but that's currently confiscated (see below).  There is a bigger picture generally of Katie not wanting to do anything she is asked and using her behaviour to distract us from what she has been asked to do (or not to do) but we're choosing this battle because it impacts on the whole household and some bright spark once said "pick your battles".

I've now bought her a large digital clock/radio and the premise is not only does she stay in her bedroom until the clock says Seven Zero Zero but she has to wait until the radio starts to play as well (at 7am).  The theory being we're using an auditory prompt alongside the visual prompt.  Today was our first day of this.  Let's just say it didn't go particularly well.  She came in at 6am to say she was awake and could she go downstairs.  Errrr no!  She was sent back to her room to read quietly i.e. no singing until the alarm went off.  She managed about 15 minutes before she started singing and had to be asked to read quietly (she was reading Toy Story and felt that singing "You've got a friend in me" was a mandatory part of the book.  "You have to sing it Mummy" she claimed!).  She then kicked off and was back in again wanting to get into bed with us.....

"I only want a huggle Mummy!" Heartstrings being played like a harp of course!.

We were prepared for all this so she was walked back to her bedroom once again.  Several visits later she upped her game and started to scream ensuring Pip was awake.  Pip doesn't like being woken up suddenly so he was screaming as well and this has also scuppered my plans for today because he's now not slept when he was planned to.  We held firm though and Katie was back in her bedroom, albeit chased there after she started the screaming.  It was only about 10 minutes at that point until the alarm went off.

TCM and I have agreed we're going to dig in and keep going with this but we're prepared for at least the next week being very tough.  Katie does not give in easily.  On the plus side she's being very good at bedtime itself, which was an ongoing issue for a long time.  We usually find an incentive works well for about a week with Katie and often find if we can get her to do something for a week, it will stick (for a while at least) so there is a special drawing box on the shelf for her to earn.  She has to stay in bed 7 consecutive nights in a row to earn it though so it might be there for some time to come!

The stealing is becoming a major irritation.  I know she's only 6 and it will probably

pass but there is a bigger picture that she understands that you can't steal and get away with it.  She hasn't stolen from anyone or anywhere outside the house however so I'm hoping there is a self-imposed boundary although things do come home from school that apparently she has "swapped with another girl".  I'm never convinced about this so usually make her take the item back into school until we can clear it with their parent.  She currently has no scooter or Hudl for two days (one day doesn't seem to make any difference) after taking my new lipstick yesterday to see if that might focus her mind....and her fingers!  I worry about too much consequence parenting though so if anyone has any other ideas I'd be keen to hear them.

After months of this I will admit I've, somewhat childishly, taken her new lip glosses and hidden them to make a point. I've told her I've taken them but  apparently I'm not allowed to because "they belong her to and I mustn't take things that belong to other people".  *cough and a head shake and a roll of the eyes*  I told her I'm hoping she might understand how I feel when she takes mine.  I'm not holding my breath though and don't really want to fight fire with fire or have double standards.  Again if anyone has any clever parenting suggestions please leave them below. I would love to hear them.  I'll read them when I'm not bleary eyed from lack of sleep!