Well today I'm going to do a very special right of passage for my little lady......the nappies are going into storage! (to be dusted off for No 2 at some point in the future)  No longer does that little tushy need a layer of protection at night.  My girl is now officially dry - day and night!  We now need to cough up for the new scooter she was promised as a reward for putting all those wees in the toilet!

The next few months are really going to be a right of passage as Katie will be leaving pre-school and preparing to join the realms of Big School.

She's ready.........but am I?
There is something so innocent about children at this age but once they start school it marks the start of their innocence slowly being stripped away (there's probably a bit of irony in that statement considering Katie is adopted and has experienced more in her life than she should have already, but you get my drift....) and they start the preparation to become fully fledged adults in the big world.


What will change I wonder?

Well for start Katie has her first solo play-date next week.  She is going straight to a friend's house from school.  No-one else has ever really picked Katie up from pre-school apart from me. I'm terrified at letting her go and play at someone else's house, on her own, without me.

She's going to start looking even more grown up. She already looks far too grown up for my liking, especially when her hair is up! She's already tall for her age and I think she's going to be a stunner when she grows up.  How soon will we have to face the issue of boyfriends (or girlfriends for that matter)? 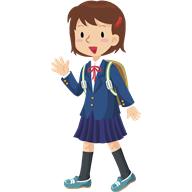 She'll have to get used to wearing school uniform every day! Mind you, that will make the current battles over clothes so much easier.  She'll have to wear those black school shoes that we have avoided like the plague thus far! We've enjoyed red shoes as much as possible, knowing the day would come when it would be grey tights and black shoes (and tons of shoe polish) for the foreseeable future.

Katie will probably transfer some of her affections to her teacher, who will soon be the font of all knowledge and invariably right about everything! I will no longer be the centre of her world.  It's as it should be but I will feel a little bit sad about that.  Her friends will start to be more reliably informed than her mum and dad. 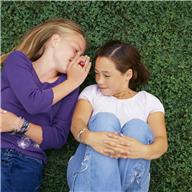 She'll learn to keep secrets.  She tells me pretty much everything at the moment and I so want to encourage her to continue being open with me.  I just want to help her learn which secrets are the right ones to keep.

She will probably learn lots of swear words in her first term at school.  I've been so restrained since Katie became part of our family.  I no longer swear in the car and can often be heard to say "Oh dear that lovely young man driving the BMW cut me up, what a silly thing to do" as opposed to what I would have said in the days before becoming a mummy. You don't need me to spell it out for you! I now use silly words instead of swearing and rarely even use colourful language these days: unless it's to ask for a crayon!  Imagine when she learns that there are words that are even more offensive than saying "poo" at every opportunity? 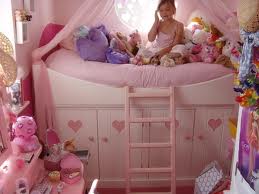 Katie is getting too big for her toddler bed and is going to be having a big bed soon as a mark of starting school.  She needs a bigger bed to store all the teddies and toys that she keeps on it as there is barely any room for her anymore!  She wants a cabin bed with a ladder.  Preferably a princess bed of some kind.  I won't be able to lift her out of bed as easily as I can now.  Her cot bed will go into storage for our next little one.  Her bedroom will start to look more like a big girl's room rather than a toddlers room.  She wants her room re-painted a different colour - purple apparently!  That will make a nice change from all that is pink in her life currently.

I won't be able to protect her as much from some of the more unsavoury things that happen at school: bullies and teachers that she might not get along with.  People who will try and strip away her self-esteem.  It will be my job though to help her learn to protect herself from these things though and help her develop the skills she will need to get through life.  I hope that being adopted doesn't bring people her way that will make her feel negative about herself.  Children can be so cruel at times.  I have experienced some bullying during my life and it was horrible. I'd love to wrap her up in bubble wrap (leaving her room to breathe of course) and protect her forever but I know that I have to let her spread her wings a bit in order to grow up. 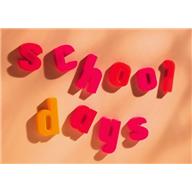 She will learn to read and write, and the world will open up more possibilities to her.  She will get a bigger sense of the world and wonder about her place within it. Her opinions about things will start to develop more substance.  She will start to learn and understand things that I can no longer remember ever learning (time to get some of those old books out and mirror her learning I think).

So much is tied up in the starting of school.  It's such a landmark.  It's exciting and scary all at the same time.  My one hope for her though is that school is somewhere she enjoys being; somewhere that helps her mind and soul develop and makes her excited about life and everything she has to offer to the world.