As I mentioned the other day, this week was the week that Katie started school.  The transition to Big School!  It's been a long wait because she is one of the older children in her class and she's been academically ready to start for quite some time.  Katie is a very bright and intelligent young lady.  She learns most things quite quickly and I think she has the capability to do anything she sets her mind to do.  Having said all that though, for someone who is so bright and clever, she's not been so bright and clever with her behaviour at the moment.  She doesn't always make the best choices about what to do with her time.

Now, all this isn't entirely unexpected and a particularly new thing.  She was definitely putting her talents to some interesting and quite frustrating uses during the summer term at pre-school and I was warned about the sort of behaviour I should expect once she started school and was very tired.  I was primed and ready to be an understanding and extremely patient Mummy.  What I didn't expect was that by starting school only in the afternoon session for the first week Katie would be a right royal little madam all morning before she went to school!  I will say I'm being polite here and that was a huge understatement!

Now I'm not sure I can blame tiredness on that although she has been going to bed very nicely this week which is a nice bonus.  The hardest part is that her ears seem to have stopped working completely at the moment and her mouth has taken over where her ears might have once worked in a supporting role.  I'm trying to ignore being told to "shut up" every 5 minutes and am walking away from some of the behaviour but Katie has still spent a considerable amount of her first week at school on "time-out" at home.  It's almost comical, well it would be if it wasn't so frustrating after a while.  For such an intelligent girl she doesn't seem to learn some stuff - or maybe she does and it's all just about getting some attention....any attention from me?  Maybe I'm the mug here really and I'm being played like a favourite song on endless repeat.  All I can say is that I feel very sorry for our cats at the moment.  Leo sprints off in the opposite direction at the merest sniff of Katie being in the room and Willow, bless her, is so long suffering but even she has taken to mewing for help from me when being loved a little too much! Mind you, Willow is currently in season and is mewing at everything that moves at the moment!  Katie is giving me lots of very undesirable behaviour. Lots of burping and farting; general rudeness; not doing anything she has been asked to do.  Trying to get out of the house within any timescale is a real challenge because Katie just will not comply.  To help with that I've created her a star chart for the mornings.  There is a section for each thing she has to do in the morning and she can put the star on when she has completed the task i.e. getting dressed; eating breakfast; cleaning teeth.  Eating is a major issue at the moment with Katie refusing to eat many of her usual foods.  I guess it's all about control.  Who has it?  Who wants it the most?  I'll be honest and admit that it really is pushing my buttons.  I'm proud of myself for staying relatively calm, most of the time.  I'm not a saint though and occasionally I do embrace my Inner Fishwife!

Of course, there are big changes happening in Katie's life.  Katie has already been through an enormous change in her life when she moved to live with us.  I am pretty sure that there are emotions being stirred in her that she is unable to articulate at the moment and the easiest thing to do is punish Mummy.  After all, I'm the one who takes her to school.  She has been missing her pre-school so we went for a visit on Thursday to say hi to all the teachers and for Katie to see that all her friends have moved on as well.  I think it helped her somewhat.  She loved being fussed by her old teachers and told how grown up she looks in her uniform.  I suspect there's a part of her that doesn't want to be a grown-up girl though and part of her is missing the security of pre-school and our routine.  I am continuing to try and be patient Mummy and fully expect that we have many weeks of difficulties to go before life calms down again.  She has been wanting cuddles and pretend milk feeding (bottle not boobies of course!) after bathtime so I'm allowing her to have a bit of baby-time to help her feel secure again.  On the plus side, Katie is starting school in the mornings this week so we can start to get back into our old morning routine. She is full-time from the week afterwards.

On a huge plus, she is loving her new school.  She goes in happily and leaves with a big smile on her face.  She is making friends.  Interestingly she has already developed school amnesia and seems unable to remember anything she has done whilst at school.  She is excited to be starting ballet at after-school club next week with one of her friends.  Katie's teachers all seem very nice and are very experienced.  I've been getting tons of homework that comes home in Katie's school bag each day.  I feel under huge pressure to be a more organised version of myself and do my homework instantly so that I can put it back in the bag for the next day (and not forget as I know I will be apt to do!).


Oh did I mention she looks sooooooooo cute in her uniform? 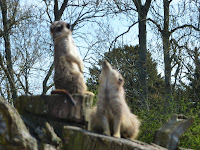 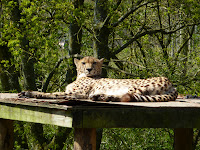 Thankfully we had an INSET day yesterday (yes in her first week of school - there is no logic!) so we did a bit of houseworky stuff in the morning and then met some friends at the local zoo in the afternoon.  It was an afternoon much like many others we've had over the summer.  Simple and fun with good company. I think I needed that as much as Katie did.  It was nice not to argue. It was nice to enjoy the sunshine and just "be".  It was a shame that Katie fell off her scooter at the end of the afternoon and is now sporting a nice graze on her chin but Mummy bought her a lovely "Doggymation" toy from the shop to cheer Katie up again (yeah yeah I know, I'm an old softie really).  In my defence I do get a 10% discount in the shop because I'm a season ticket holder and yes I do know that Katie already has about 100 soft toys and I'll end up spoiling her if I'm not careful.  It was nice to have a positive end to the week.

Today has been a not such a great day.  Started badly trying to get out for Katie's swimming lesson and missy was in an over-excitable mood when our Social Worker came to visit but I've handed Katie over to Daddy for some together time whilst I take a break and write this post.  I'm taking Katie out in a minute to buy her new ballet uniform which she is very excited about.