When I was growing up (in the days of only three channels, before Channel 4, when dinosaurs freely roamed the earth) there was a saying about watching the "goggle box" and that it would give you "square eyes". Nowadays, since the invention of those amazing things called satellites we have mobile phones and endless amounts of drivel on the goggle box to distract ourselves from things like housework.  I am a big fan of films (I still go to the "pictures" rather than the "movies") and love quite a few American TV programmes, brought to me by the wonders of digital and satellite TV.  The world will never be the same since Jack Bauer graced our screens, in my opinion, and I love every episode of "Buffy The Vampire Slayer", owning all the episodes on that other amazing invention, the DVD!  I used to love "Friends" and currently love "Desperate Housewives" amongst other favourites.  My daughter is growing up in a technological age.  I love the computer/laptop and taught her how to use it when she was around three years old (partly to stop her pressing all the buttons randomly).  She is a whizz (if ever a whizz there was) with the mobile phone and has taught me a few tricks with the Sky remote control.  She is exposed to so much technology.  She will probably never know what it's like to sit at home waiting for a boy (or girl) to phone on the landline because mobile phones weren't invented and we used to talk to our friends, in person!  I embrace the changes the world has gone through since I was a teenager and have an up-to date HTC mobile touch screen phone.  I text; tweet; I use social networking sites and I'm now about to risk sounding like Mary Whitehouse...........

I am happy to let Katie watch TV (in addition to reading lots of books of course!).  She watches a bit in bed in the morning and likes to watch TV on the computer.  I vet most of the TV that Katie watches.  I like to know what she is watching; what the story lines are and what the characters are called.  I can sing the theme tunes to far too many Cebeebies and Milkshake children's programmes.  I fully expected that some of the programmes she might watch would drive me a little but nuts but I never expected that I might actually ban Katie from watching some programmes. 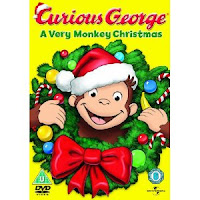 The first item to make it onto our banned list was Curious George.  Now I rather like Curious George if I'm honest.  He's pretty cute.  I quite enjoyed the first few films, although what on earth were they thinking when they made the A Very Monkey Christmas film?  OMG it's in a league of its own! The reason it's on our banned list is because Katie decided that she would become Curious George and we were subjected to months of her making monkey noises.  This is what drove us to distraction.  You couldn't have a sensible conversation without having to speak monkey (and I'm not talking about the Monkey TV Series) either.

The second item on our "not on your life" list is Baby Jake for pretty much the same reasons as Curious George.  I suspect it's good for babies to watch but I didn't care to watch Katie regressing and singing Gogi Gia and Yacki Yacki Yacki over and over again.  I thought I was in The Twilight Zone.

The third programme that I take issues with (but haven't banned) is Peppa Pig.  I have several issues with Peppa Pig if I'm honest:

1) Peppa is actually quite ill mannered a lot of the time (Humf and his friends are much better). 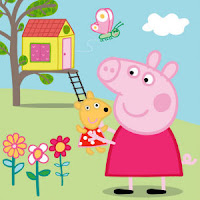 2) Daddy Pig can never do anything right (except jump into a swimming pool without making a splash!).  What sort of message is that giving about Daddies?
3) Peppa makes lots of jokes about his big tummy, which Katie has started saying to her father.
4) Peppa and her family don't seem to use suntan lotion at the beach (although I'm glad they now use car seats!)

We had to stop Katie watching Peppa for a while because she was blowing raspberries and imitating Peppa.  (I will just say that I love Mrs Rabbit though because she does so many jobs and loved the episode when she was ill and everyone else had to do her jobs for the day.  That was brilliant!). I also love the fact that Brian Blessed appears intermittently!

On the plus side, I do quite like Ben and Holly's Little Kingdom although Nanny Plum gets the "most rude" award on that programme and we really love Grandpa in my Pocket.  Recently Katie has really got into watching Andy's Wild Adventures which is pretty educational.

I'm not a Grumpy Old Lady (OK sometimes I am a bit opinionated) and like to think I'm open minded and moving with the times but I do sometimes wonder how some programmes make it onto TV and what the creators were thinking at the time!  I won't moan about In The Night Garden (although what on earth is it all about?) because I have a soft spot for the programme.  Katie loved it when she came to live with us and we embraced it and could sing every single bloomin song!  Daddy bear often came home complaining about singing the songs in his head during particularly boring meetings and I often find myself humming the theme tune to Igam Ogam when I'm feeling stressed or in a bit of a rush!

I could write about this topic for ages (which might show that I watch far too much TV so I'll restrain myself).   I do think that there is a lot of great stuff out there on the old Goggle Box but that the creators of children's TV programmes need to stop and think about what they are creating from the perspective of a child (and their poor parents!) and the impact that their programme will have on the children and their imitation abilities.